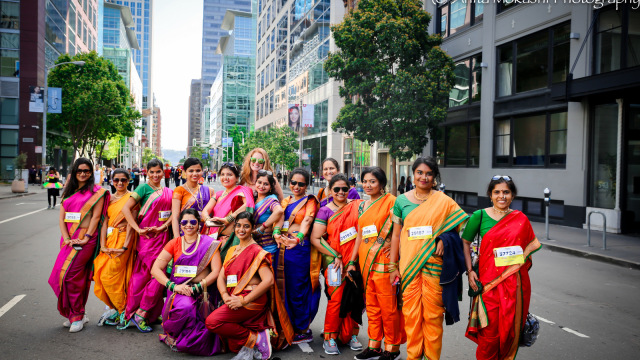 Bay to Breakers is an annual footrace in San Francisco, California on the third Sunday of May. It is the longest consecutively run footrace in the world. The phrase “Bay to Breakers” reflects the fact that the race starts at the northeast end of the downtown area a few blocks from The Embarcadero (adjacent to San Francisco Bay) and runs west through the city to finish at the Great Highway (adjacent to the Pacific coast, where breakers crash onto Ocean Beach). The complete course is 7.46 miles (12.01 km) long. 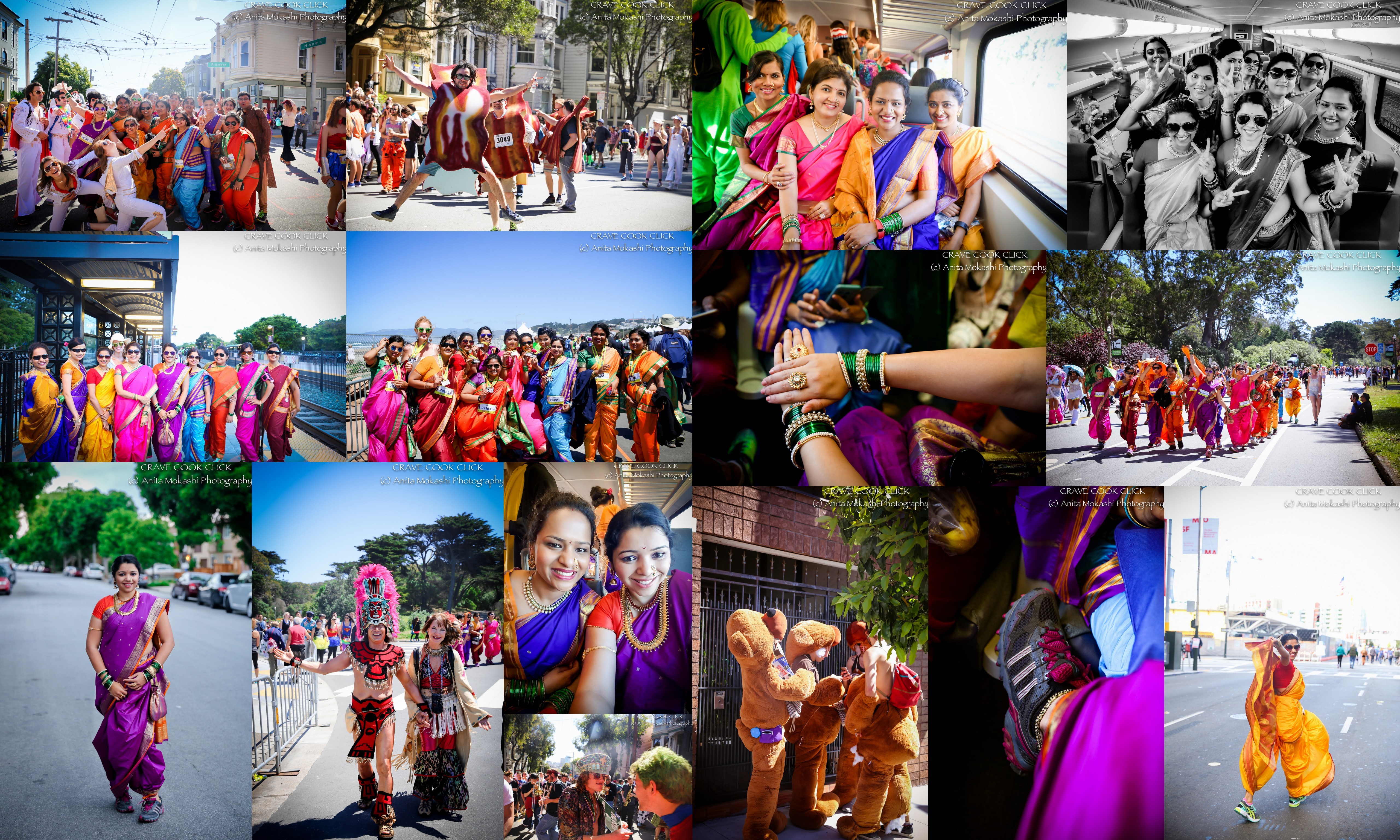 Bay to Breakers is well known for many participants wearing costumes, and a few engaging in varying degrees of public nudity.From 1986 to 2010, it was officially the world’s largest footrace with 110,000 participants, until it was surpassed by City2Surf event in Sydney.Attendance in 2016 was reported at roughly 80,000.In 2015, Zappos.com signed on as the multi-year title sponsor of “Bay to Breakers”; the name of the race became “Zappos.com Bay to Breakers”. 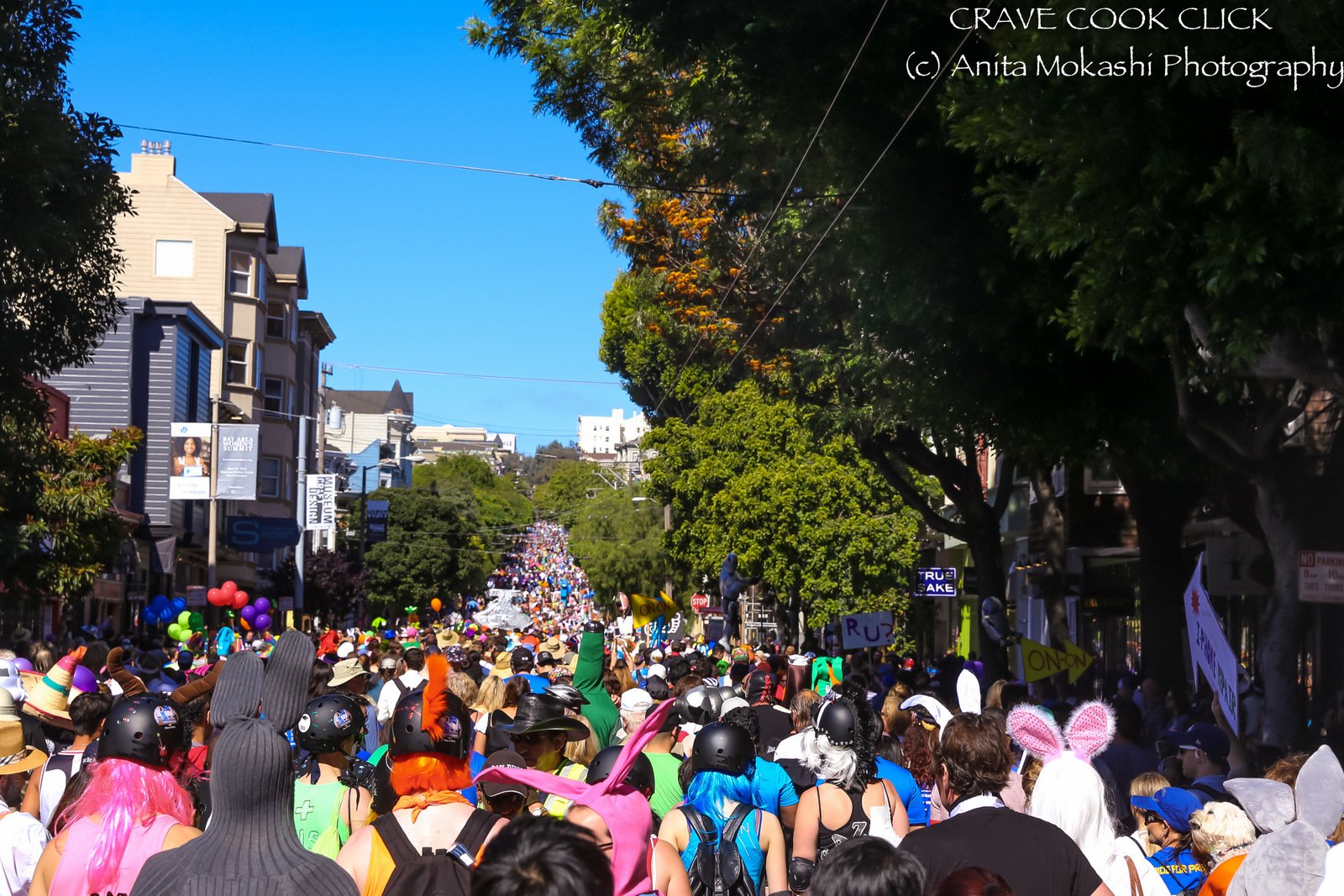 I ran my 1st Bay2Breakers last year and my costume was Superwoman with a gang of 5 other gals. When i was running the course last year, I saw 2 non indian runners wore saree as a costume. It was then I decided that next year I will wear a costume which will represent India.

And thus this year I ran Bay2Breakers wearing a Nauwari along with 15 other ladies from my group Crave Cook Click on facebook.

About a month back I created an event for running the race in nauwari and got great response. 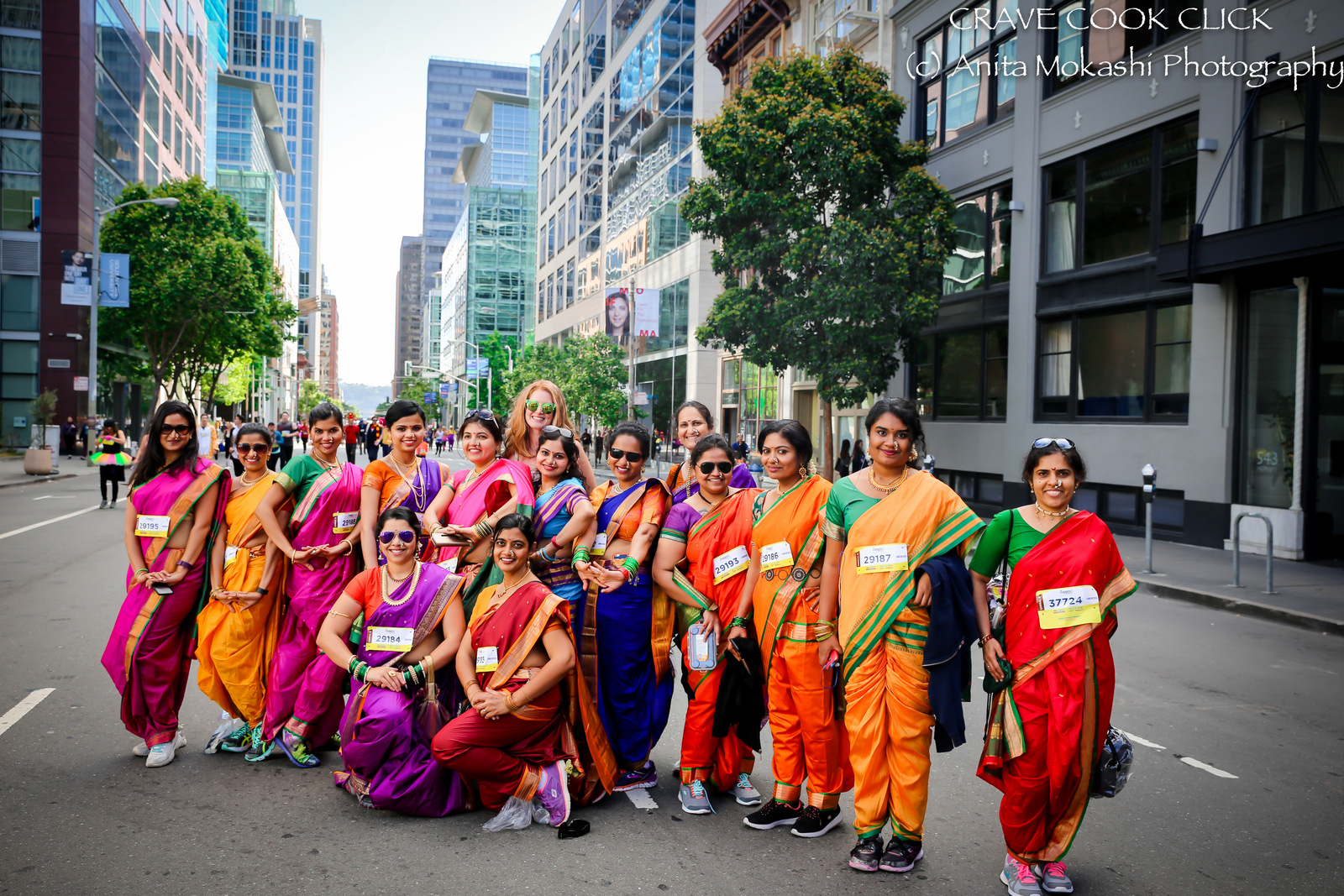 Nauwari is a style of sari draping which is very similar to the way the Maharashtrian dhoti is worn. The word Kaashtha refers to the sari being tucked at the back.Since this sari is usually worn using a single nine yard cloth, it is also referred to as Nauvari which means Nine Yards.This saree is from the state if Maharashtra in India. 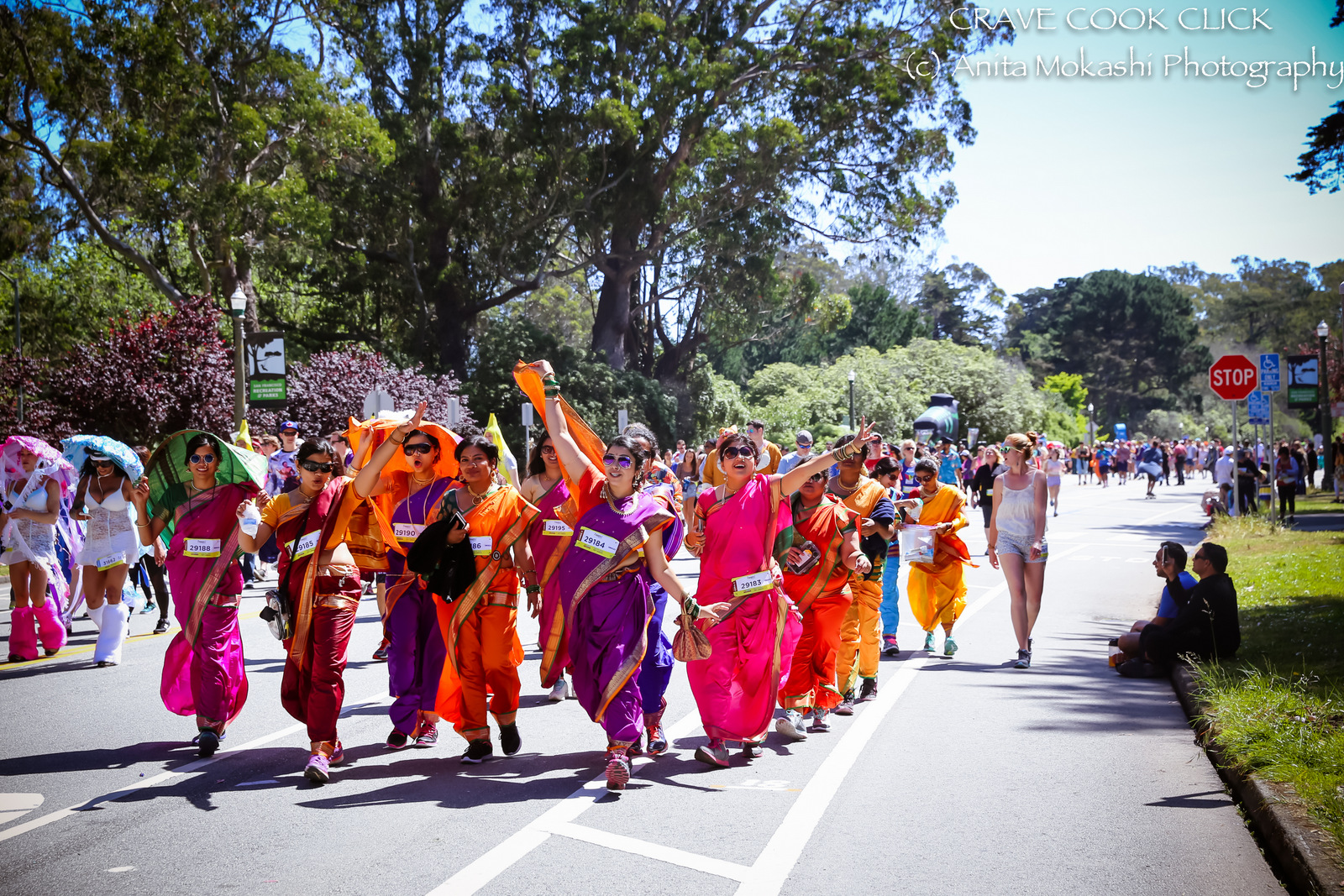 For the race, we rented our Nauwaris from Texas. Thanks to Crave Cook Click member Aishwarya Gharpure who got these sarees for us from her sister. We planned this event for more than a month..from finalising the count of ppl, renting nauwaris, getting accessories, registerations, collecting bibs, finding out race day transportation etc. Special thanks to Subadra Jayram and Neha Agarwal for helping me out with all the planning 🙂

All ladies got up at 4 am on the race day, got ready in nauwaris and accesories and were present at the Mountain View Caltrain station at sharp 6am. That was just craziness…hehe. The train was packed with all other runners who were calling us Team India..lol..It made us feel so special. We made heads turn on the course and saw many Instagram posts floating around with our group pics. 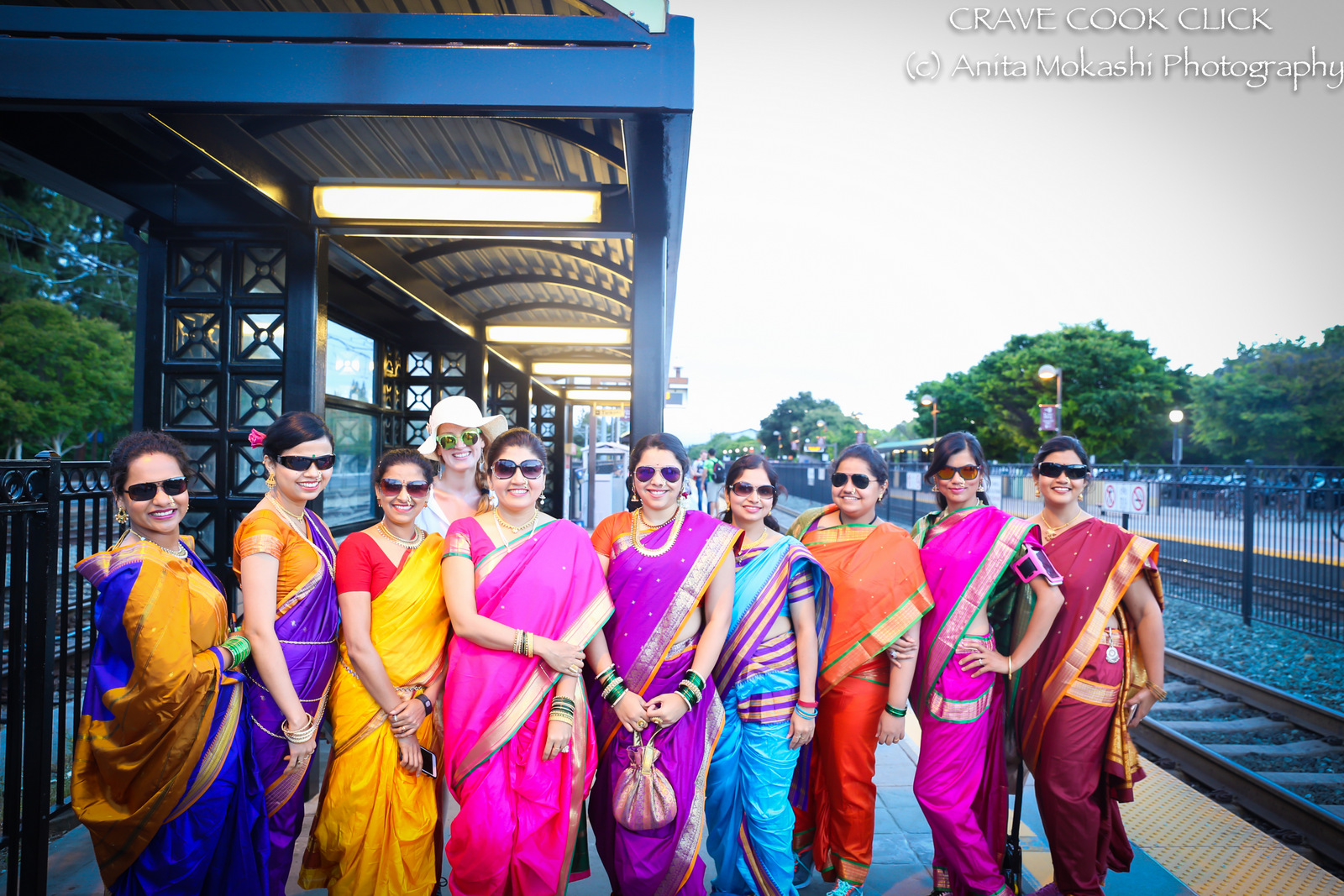 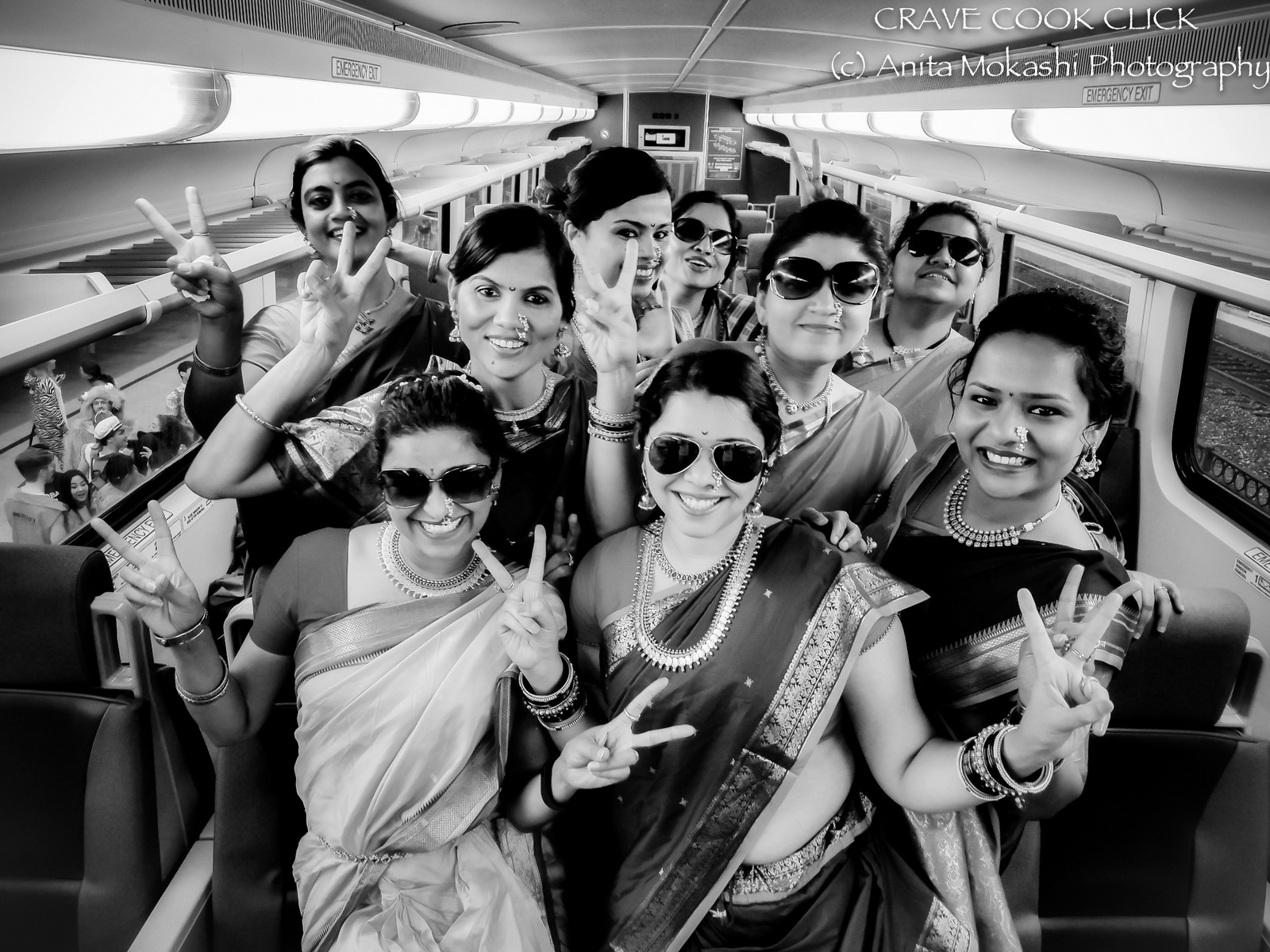 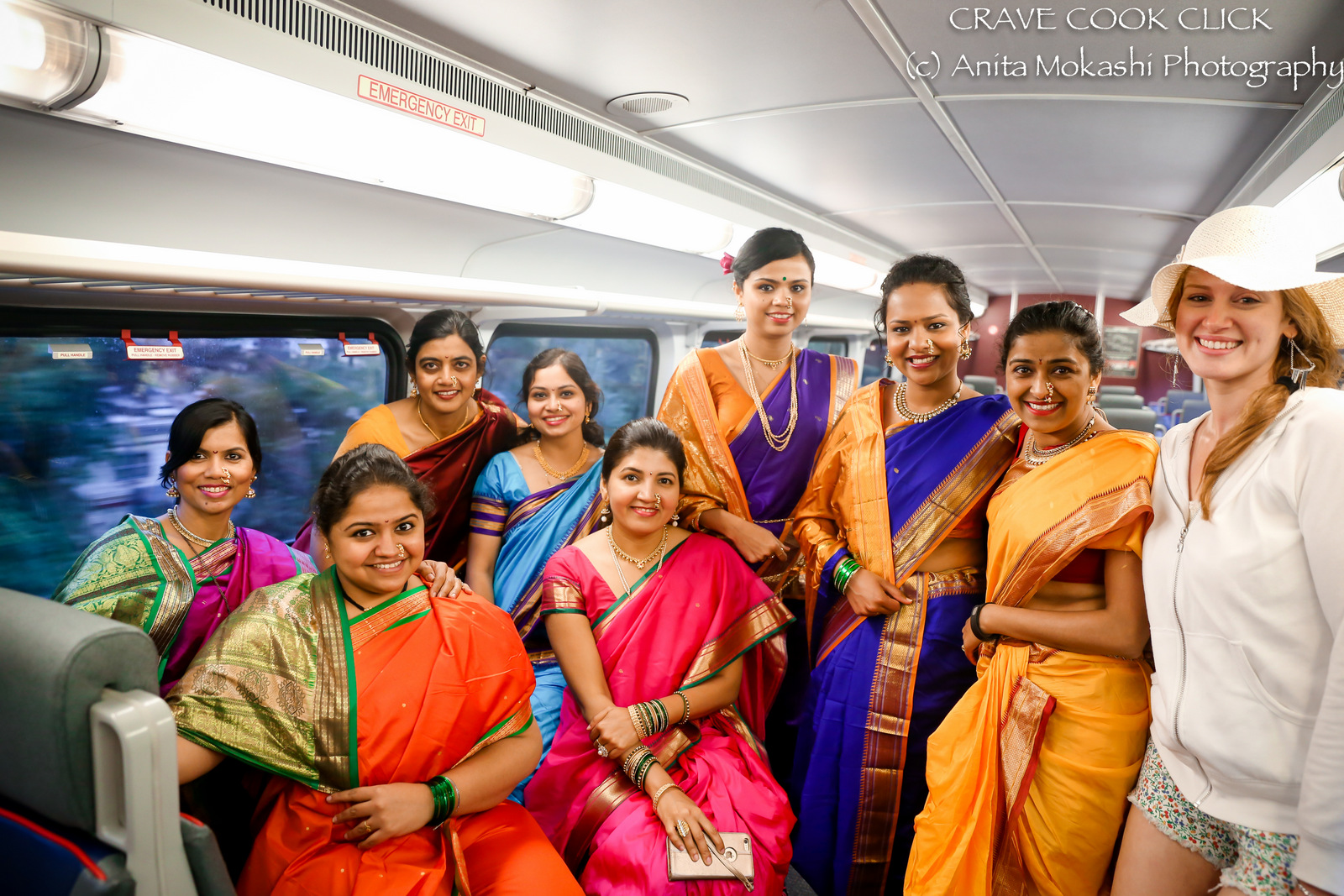 I am soo glad that all the efforts which we put in were so appreciated and applauded. Many people on the course came and told us that we looked so awesome and unique. They spoke to us about India and how colorful the country is. They wanted to click selfies with us. 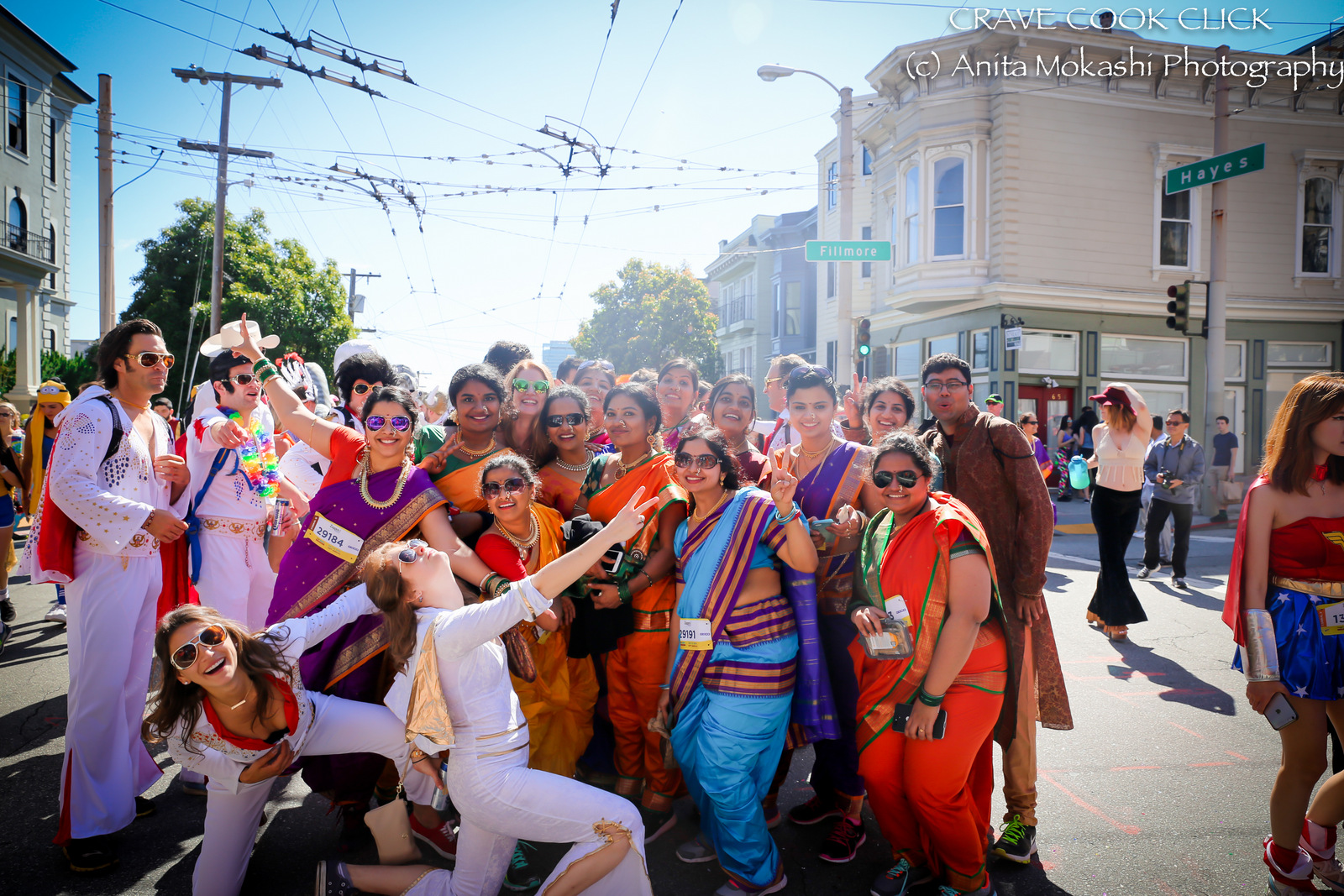 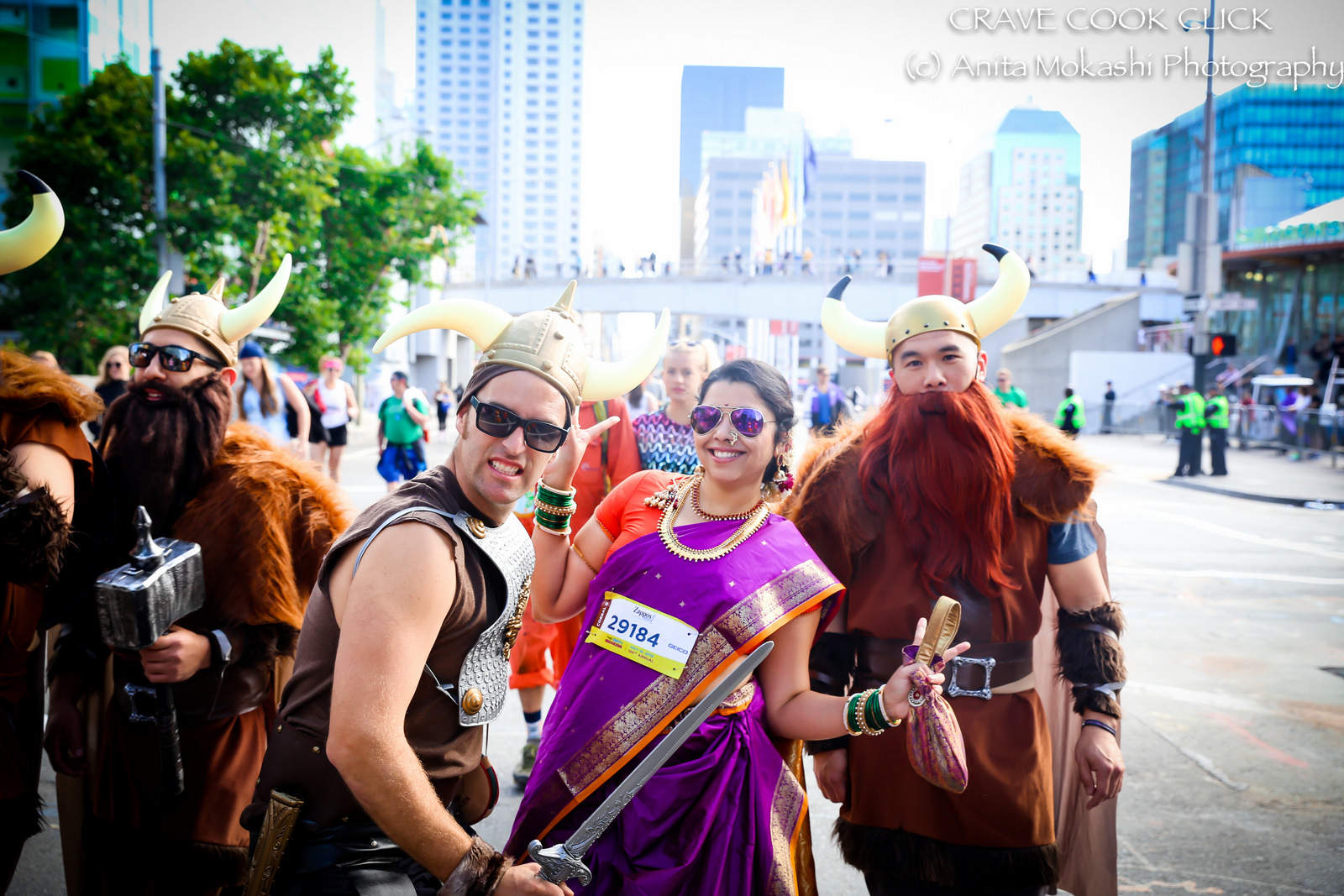 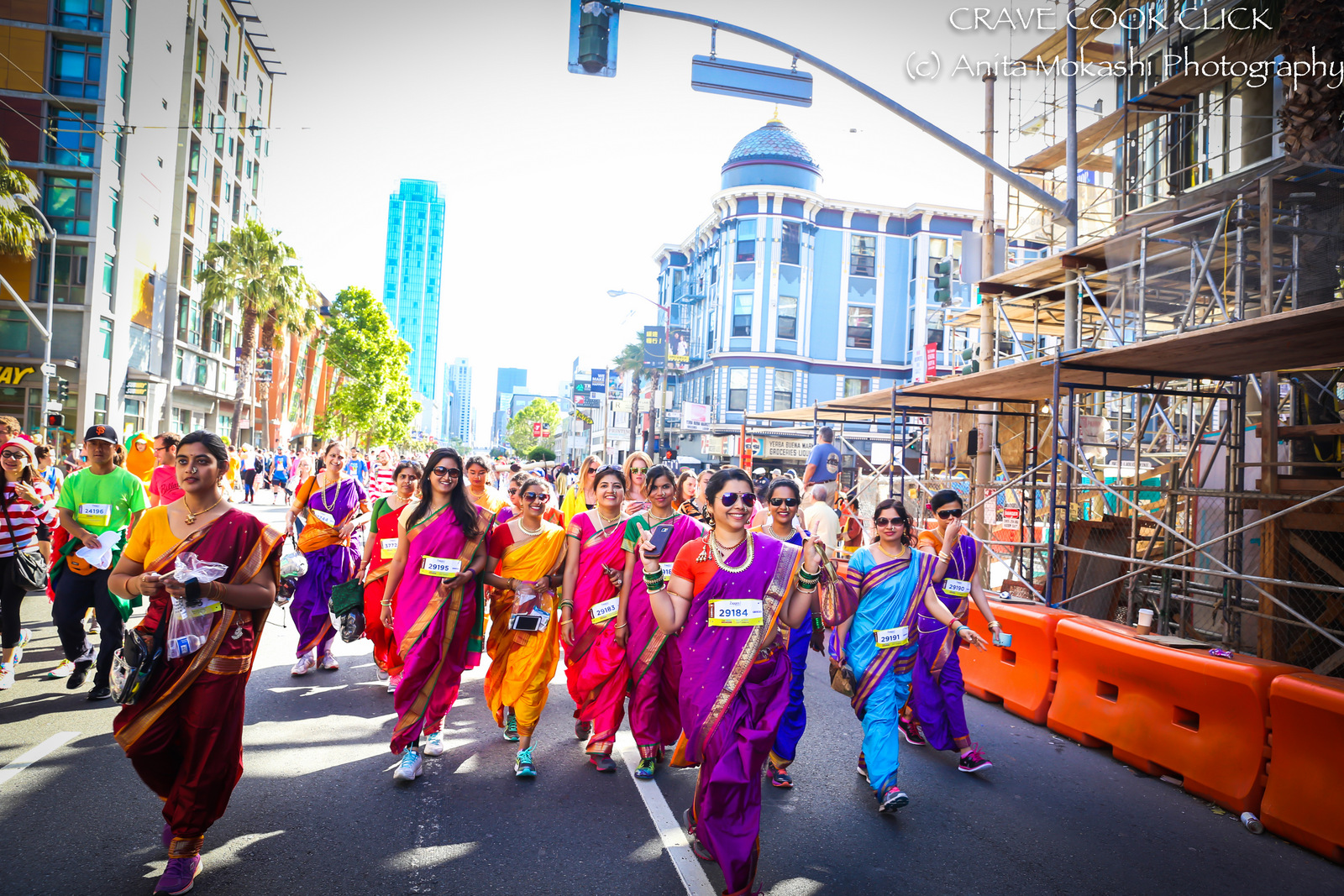 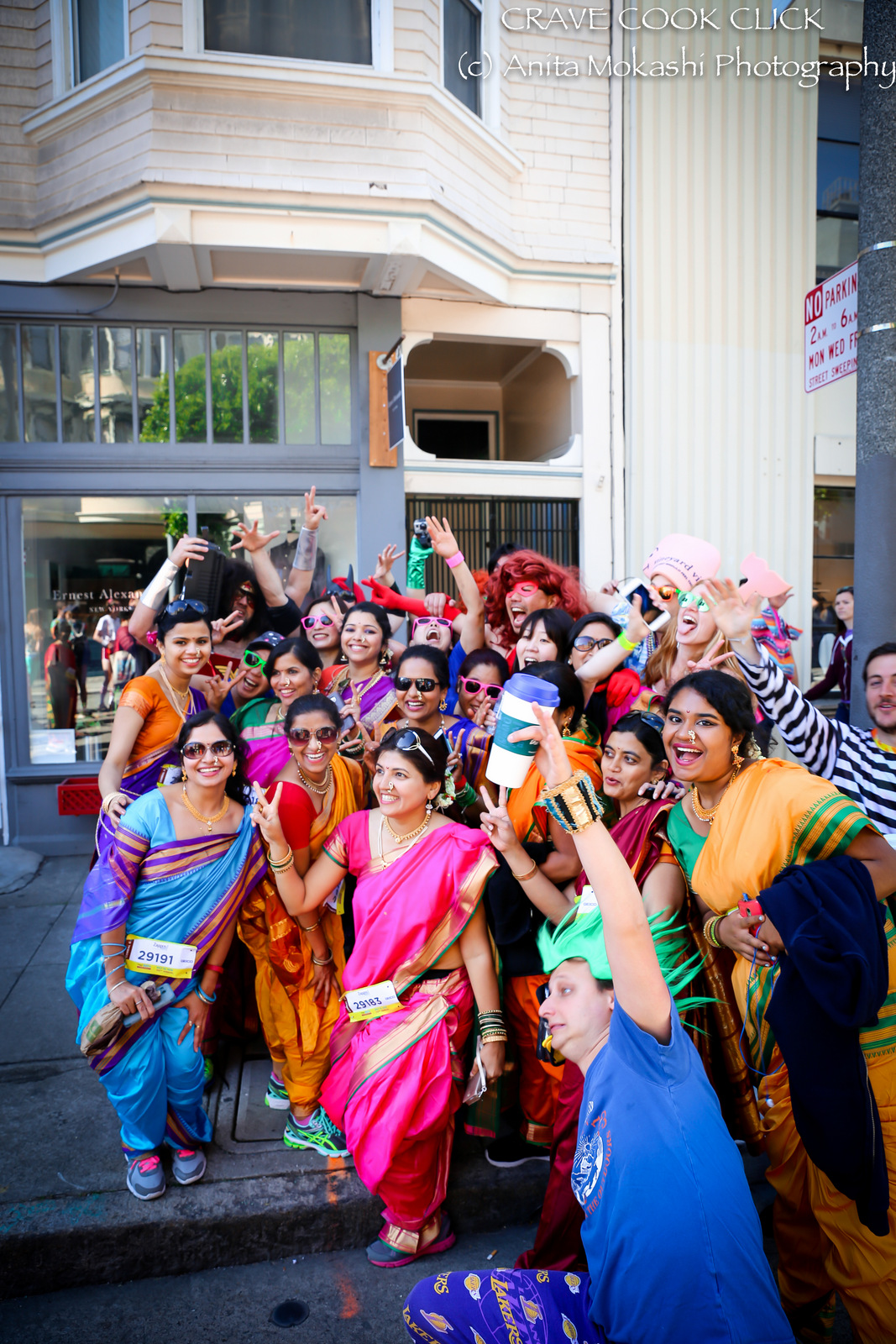 When we were approaching the finish line, we held each others hands and crossed it together..For me it was the best moment of the race:) We are thousands of miles away from India but still it is closest in our heart and we totally rocked representing it 🙂 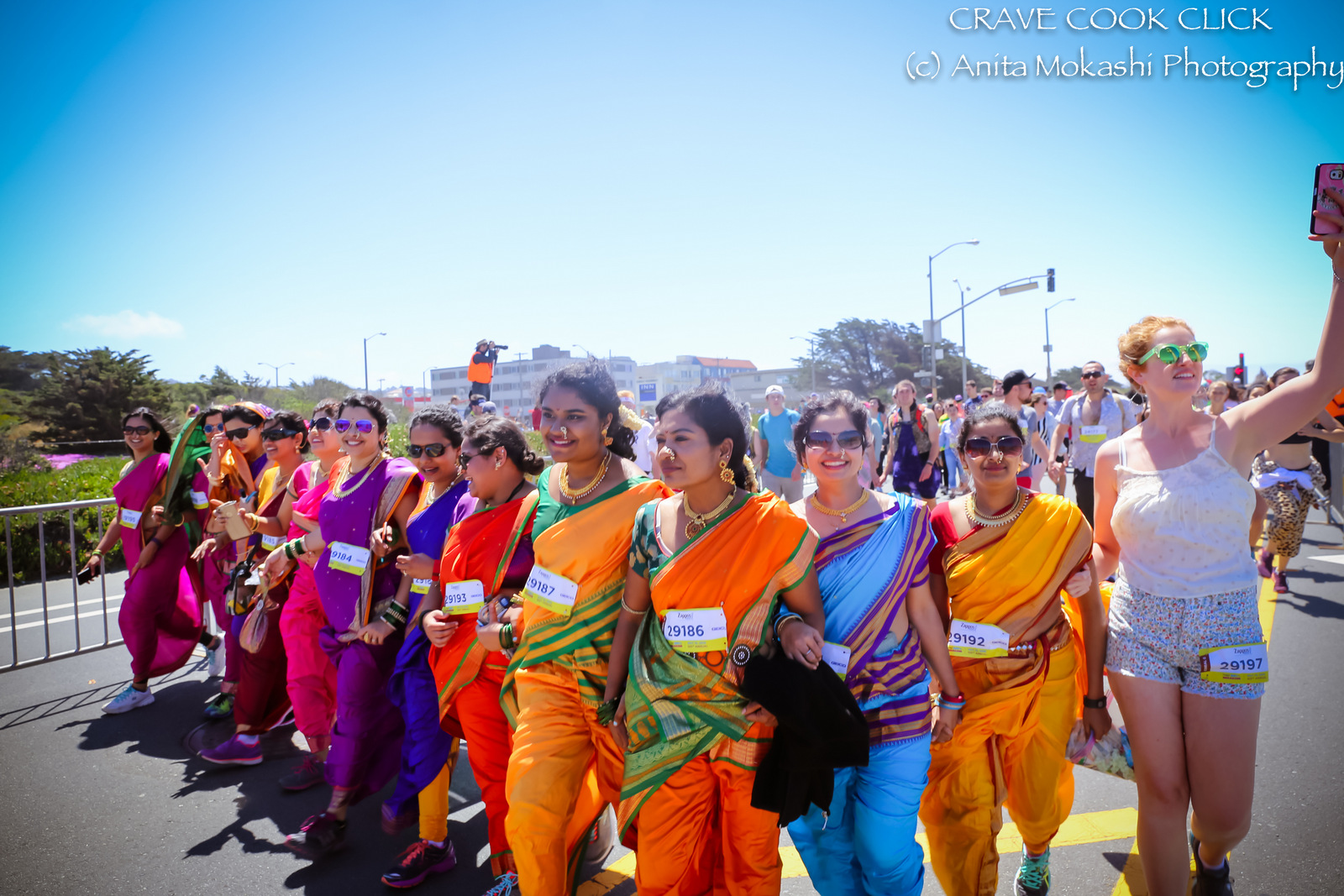 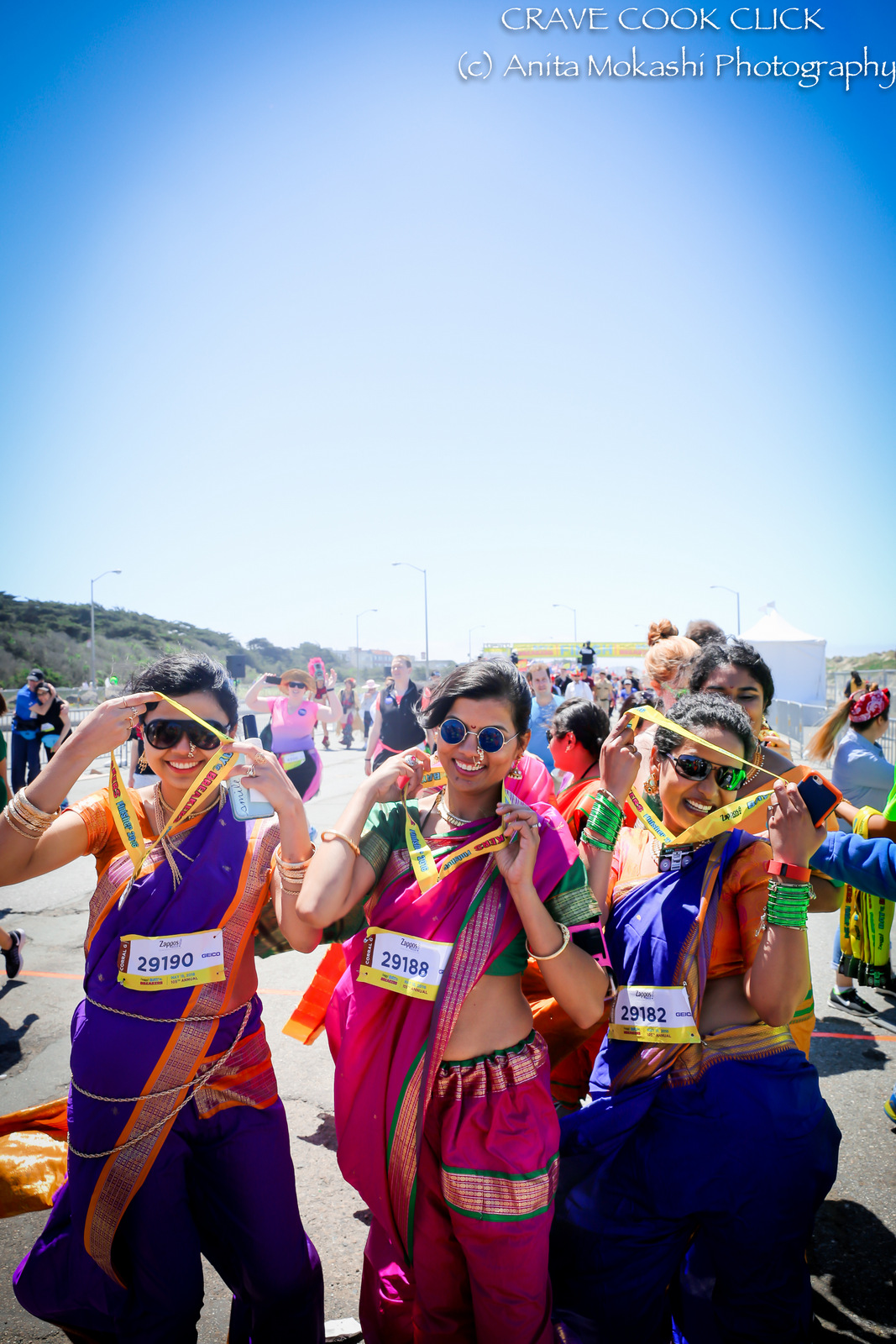 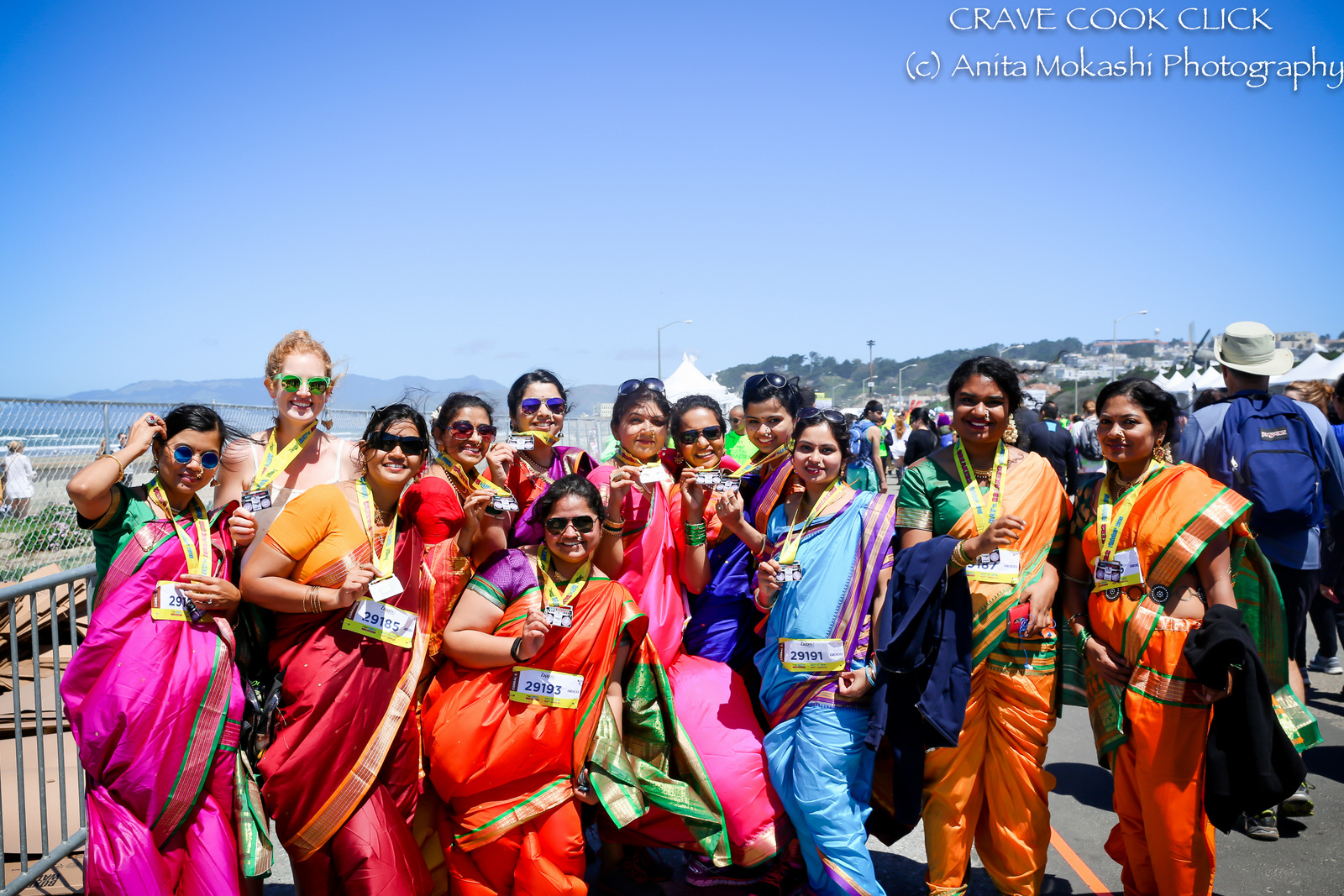 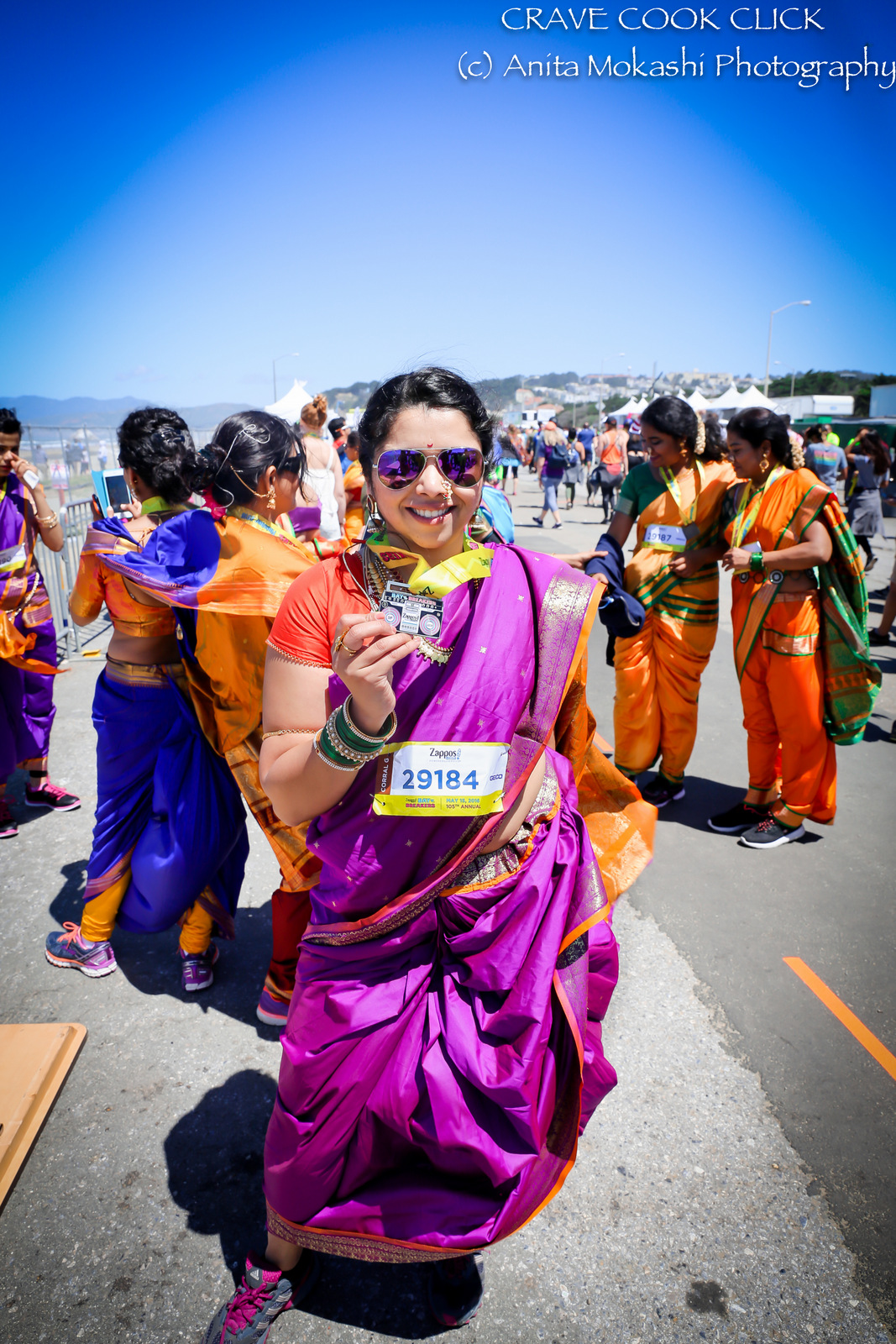 Running Bay2Breakers every year in a way that we represent India will be a tradition now onwards on our Crave Cook Click group :). To join us.. Click here

Special thanks to my hubby Ritesh for patiently clicking these pics for us. Editing is done by me 🙂 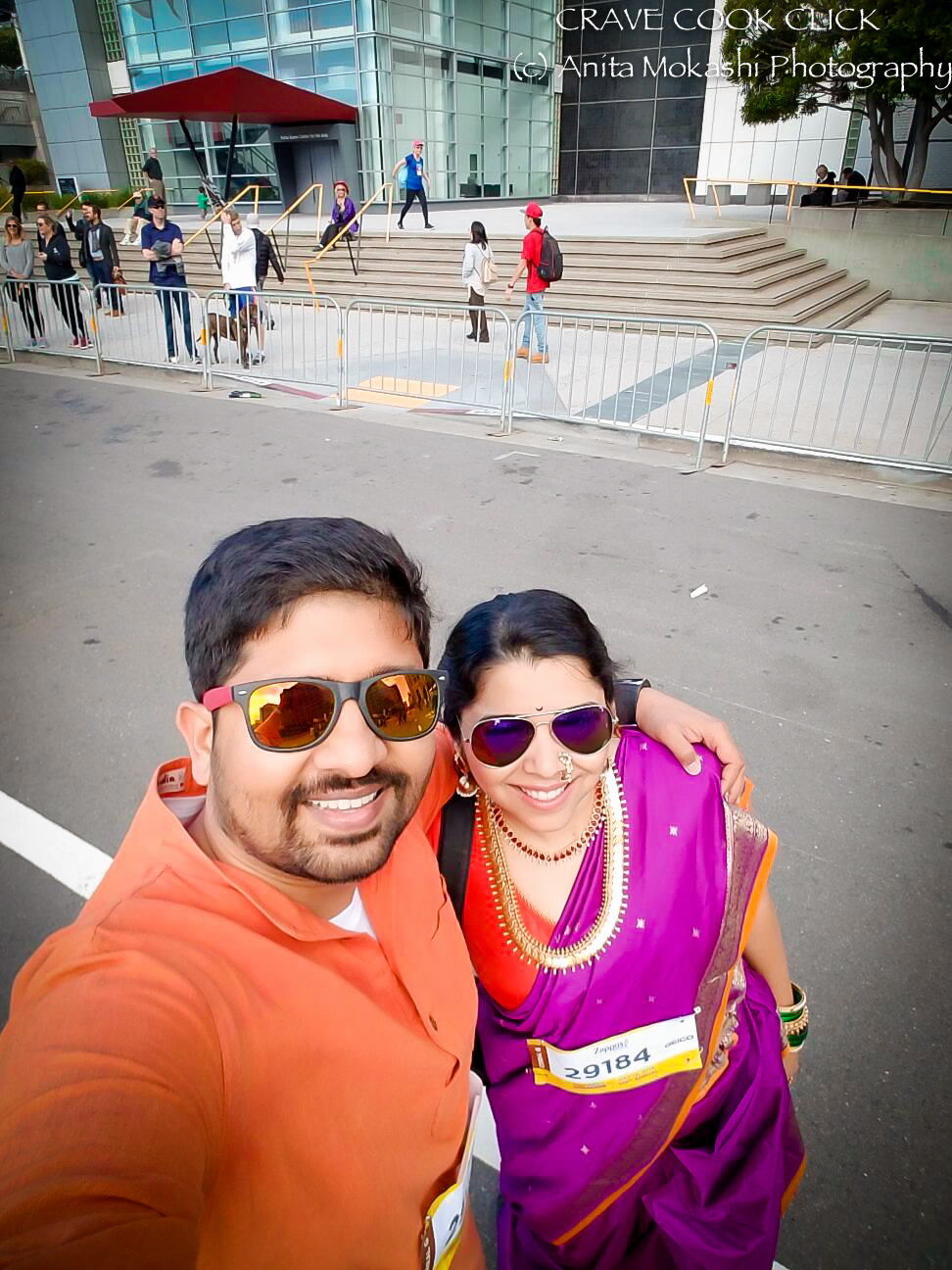 Here are some interesting pics from the race day:)