Sabudana Kheer is a pudding made from sago/tapioca, milk, sugar, cardamom, dry fruits and saffron. It is a famous fasting delicacy and is made on auspicious occasions throughout the year. I made it for the occasion of Ashadhi Ekadashi.

Being from Pandharpur, where Ashadhi Ekadashi is the biggest festival I celebrate it every year. I fast and make different vrat delicacies. I have made Sadudana Vadas, Kandi Pedhe, etc. This year it was Sabudana Kheer

A very famous saying associated with this festival: ‘Ekadashi Dupatt Khashi’. It means even if you fast you tend to eat double of your regular meals 🙂

Now Some info about Ashadhi Ekadashi

Ashadhi Ekadashi is more of a religious procession festival and is celebrated during the months of June- July (Aashaadh Shukla paksha). People consider the two eleventh days, “Ekadashi”, of every month to be of special importance. But the eleventh day (bright) of Ashadh is known as the great Ekadashi or Mahaekadashi. This Mahaekadashi is also known as Shayani Ekadashi, because on this day Vishnu falls asleep to wake up four months later on Prabodhini Ekadashi in the Kartik month. This period is known as Chaturmas and coincides with the rainy season.

Ashadhi Ekadashi is the day of fast and on this day people go walking in huge processions to Pandharpur singing the Abhangas (chanting hymns) of Saint Tukaram and Saint Dnyaneshwar to see their God Vitthal. The yatra starts in Allandi and ends on Guru Poornima day at Pandharpur.

The feast of Ashadhi Ekadashi is celebrated with great solemnity at Pandharpur. Hundreds of thousands go in procession from different parts of Maharashtra, some carrying palanquins with the images of the great saints of Maharashtra. Dnaneshwar’s image is carried from Alandi, Tukaram’s from Dehu, Eknath’s from Paithan, Nivruttinath’s from Trimbakeshwar, Muktabai’s from Edlabad, and Sopan’s from Sasvad.

This recipe is also special as I have used the props which my Aai Baba gifted me on my birthday!

Here is the recipe

A few flakes of saffron color

Soak the sabudana in water for 15 minutes.

Boil milk with the sugar, nuts and cardamoms and add the sabudana after draining the water. Add 1 cup of water.

Boil until the sabudana becomes swollen and translucent.

Soak saffron flakes in a 1/4 cup of hot milk for 10 minutes.

Mix to squeeze out color and add all of it to the boiling milk. 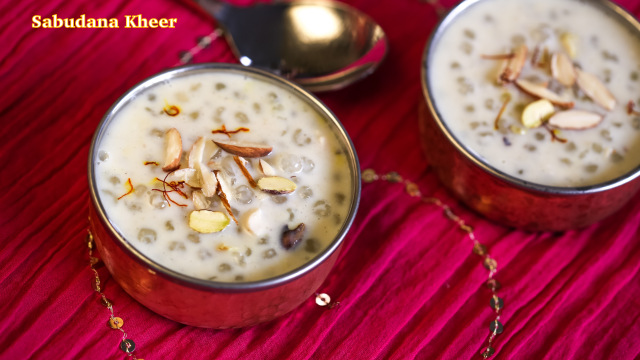