Baked Samosa is healthier version of samosa with a filling of mashed potatoes and beetroot.  Generally the regular samosa contains a maida flour shell stuffed with some filling, generally a mixture of mashed boiled potato, onion, green peas, spices and green chili.  The entire pastry is then deep fried to a golden brown colour, in vegetable oil. It is served hot and is often eaten with fresh Indian chutney, such as mint, coriander or tamarind. It can also be prepared as a sweet form, rather than as a savory one. Samosas are often served in chaat, along with the traditional accompaniments of yogurt, chutney, chopped onions, coriander, and chaat masala. 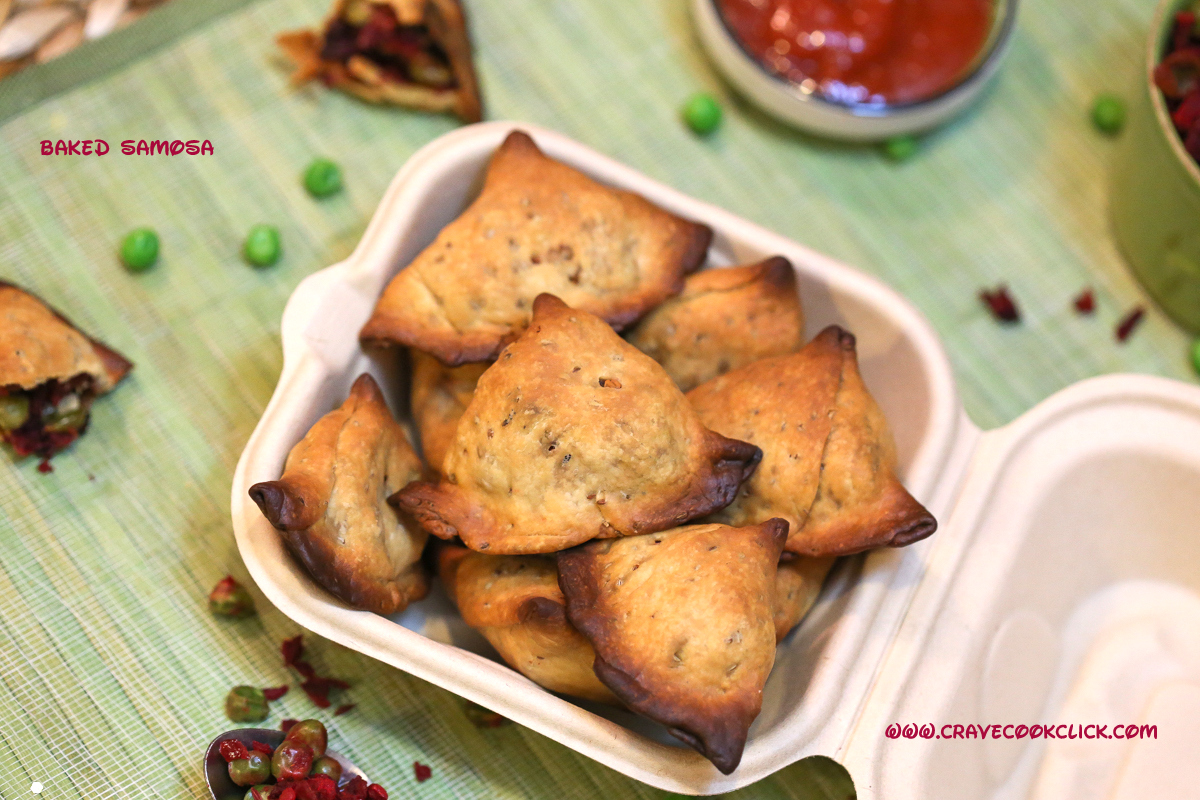 I thought of giving it a twist by baking it and making a healthy filling of beetroot.

Now add ginger garlic paste saute until raw smell goes. Now add all the spices and mix well, add the grated beet, mashed potatoes and mix until the spices are well spread. Set aside to cool

In a medium sized bowl add flour, baking powder, salt, ajwain seeds, oil and mix well. Add water and knead to a dough. Make sure the dough is not too firm or too smooth, cover with a wet cloth and set aside for 30 mins

Use water to add the sides, join both ends of the dough to form a triangle and place in the middle of your fist to form a pocket. Ensure that the cone shaped dough is well sealed to avoid the filling to spill. Take 1 tbsp of the prepared filling and fill the cone dough. Make sure that the samosa wrapper is thin so that the warp gets well baked and easy to eat too

Now add water to the ends of the cone and pull one side of the dough to the other end and seal. Take care not to tear the dough. Place on prepared tray and place the samosa in a sitting position

After you have repeated the same for all the samosas, brush with oil and bake on a pre-headed oven at 350 F / 180 C for 25-30 minutes until golden, you can flip the tray once half way through 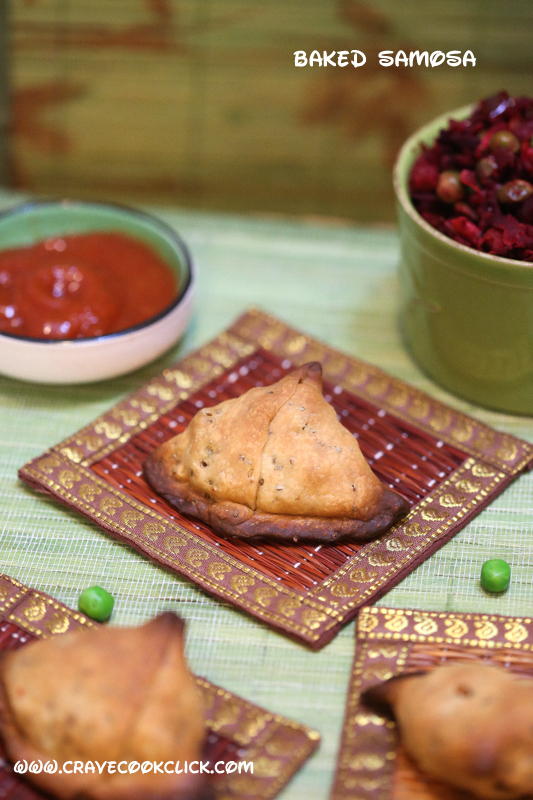 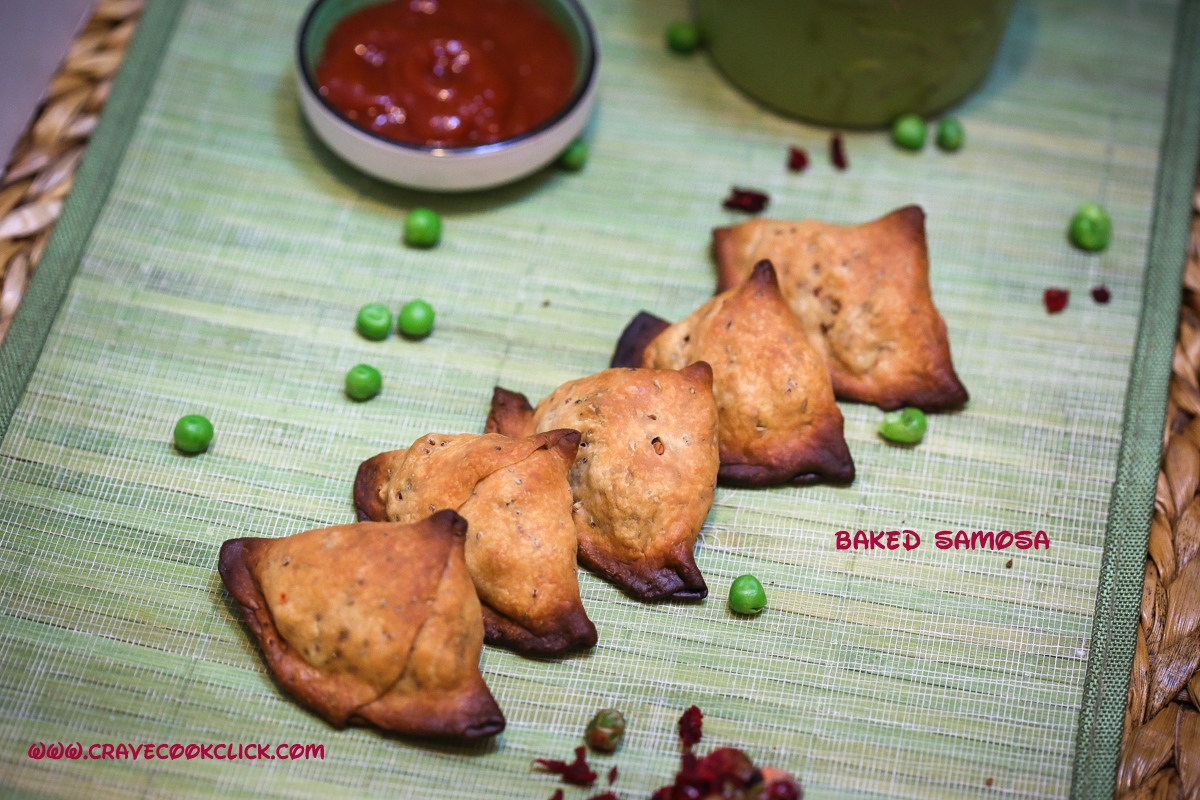 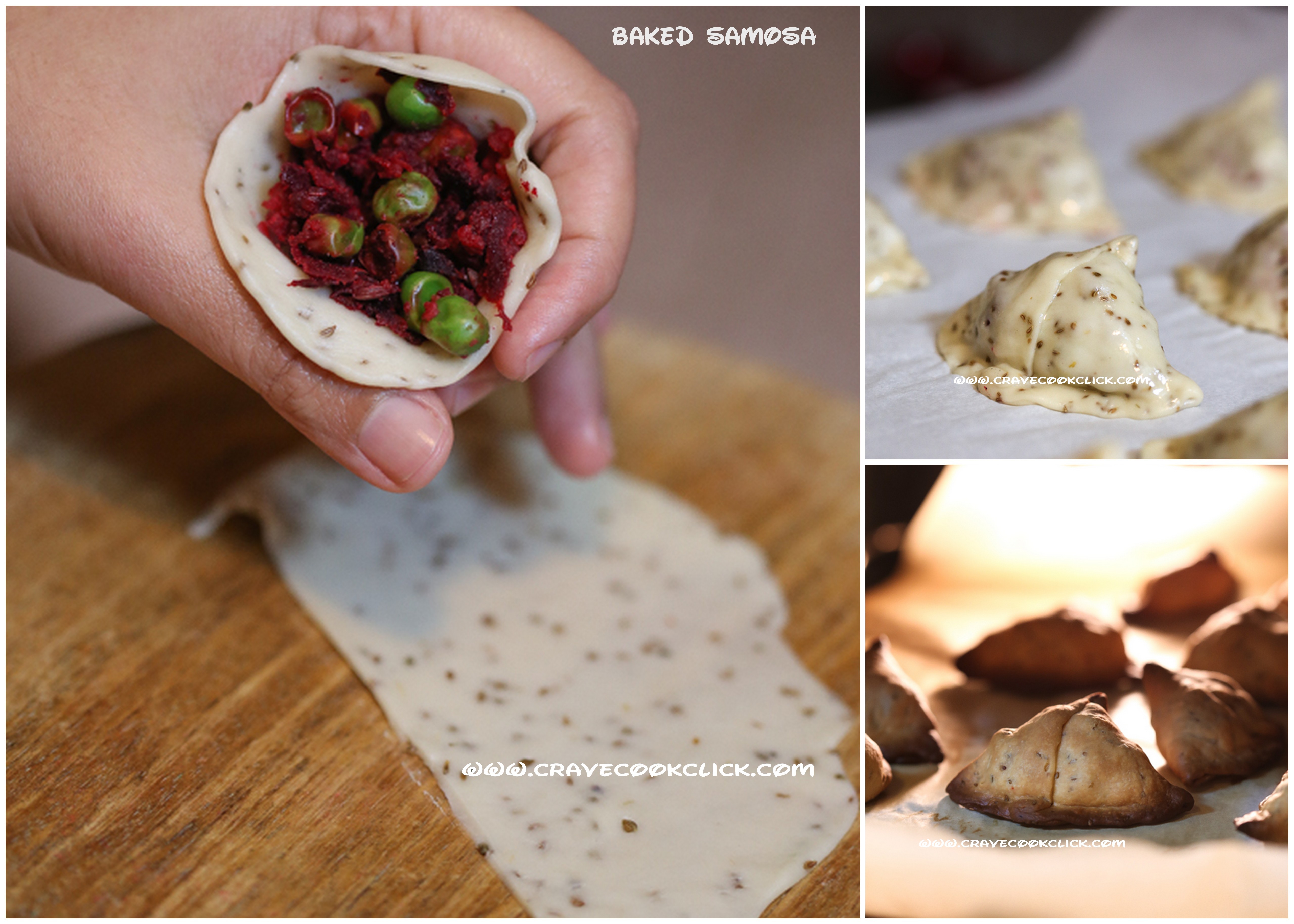 Here are some interesting worldwide facts about Samosa 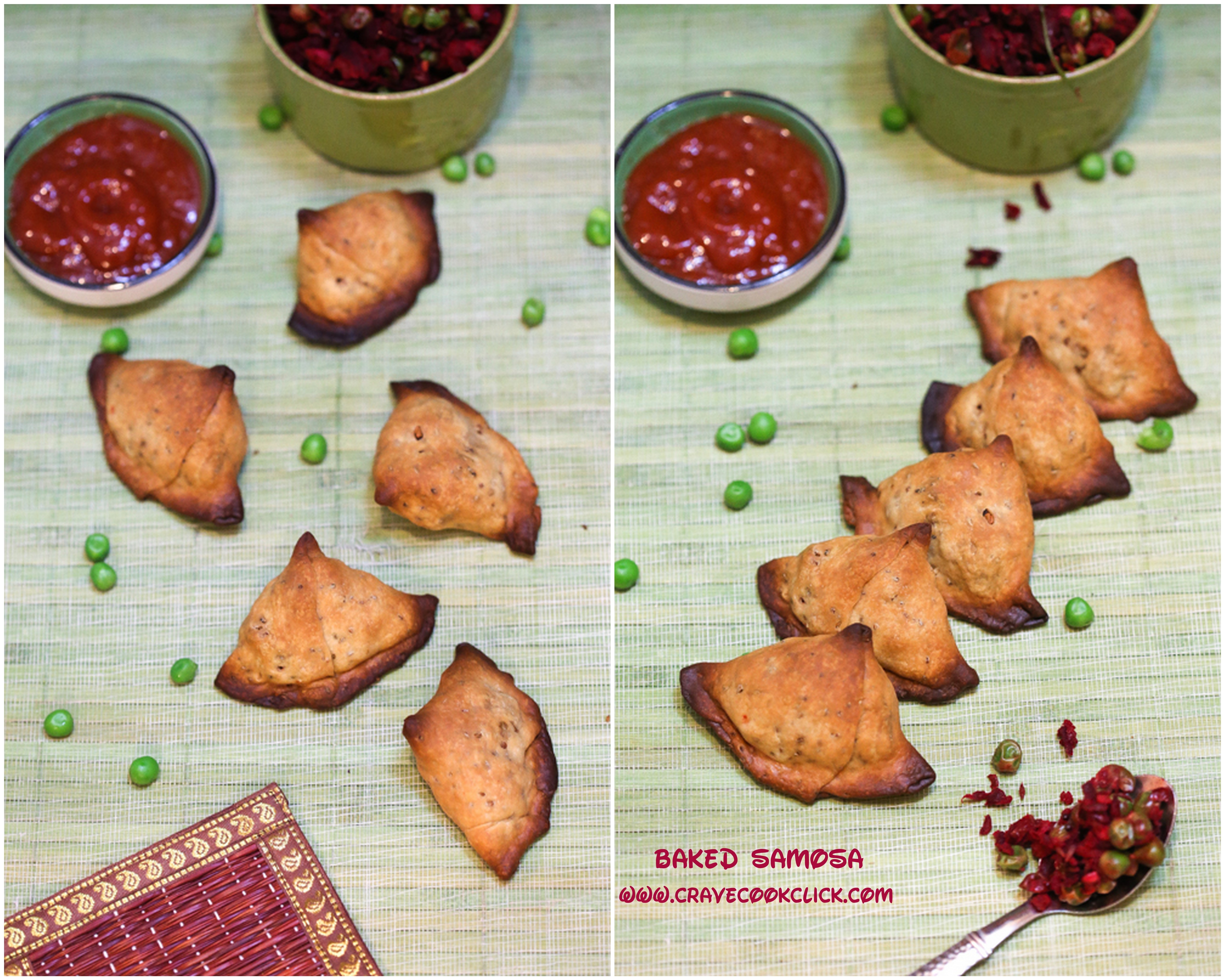 In Delhi, Punjab, Himachal Pradesh, Madhya Pradesh, Uttar Pradesh, Uttarakhand, and other Northern States of India, a bigger version of the samosa with a spicy filling of masala potatoes, peas, crushed green chilies, and sometimes dry fruits, as well as other variations, is quite popular. The samosa is bigger compared to other Indian and foreign variants. 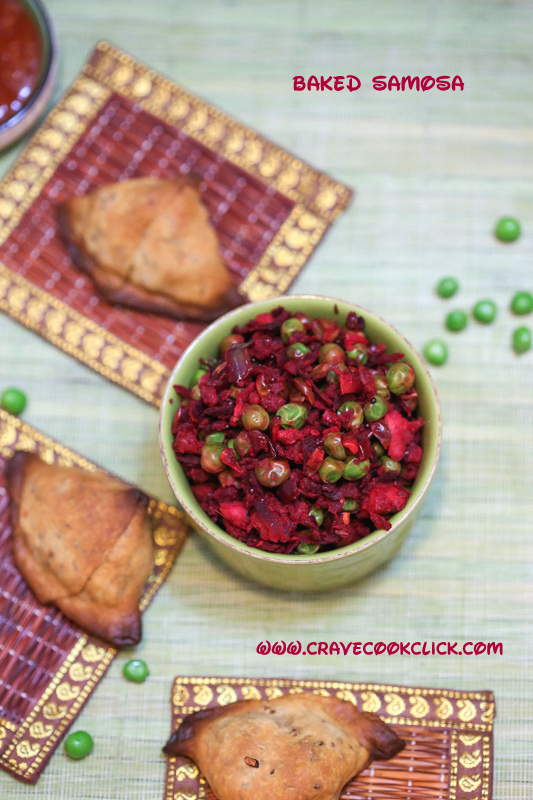 Burmese-style samusa are flat and triangular, and usually smaller than their Indian counterparts.

The samosa is called singoda in Nepal. As in India, it is a very popular part of local cuisine. Vendors sell the dish in various markets and restaurants. 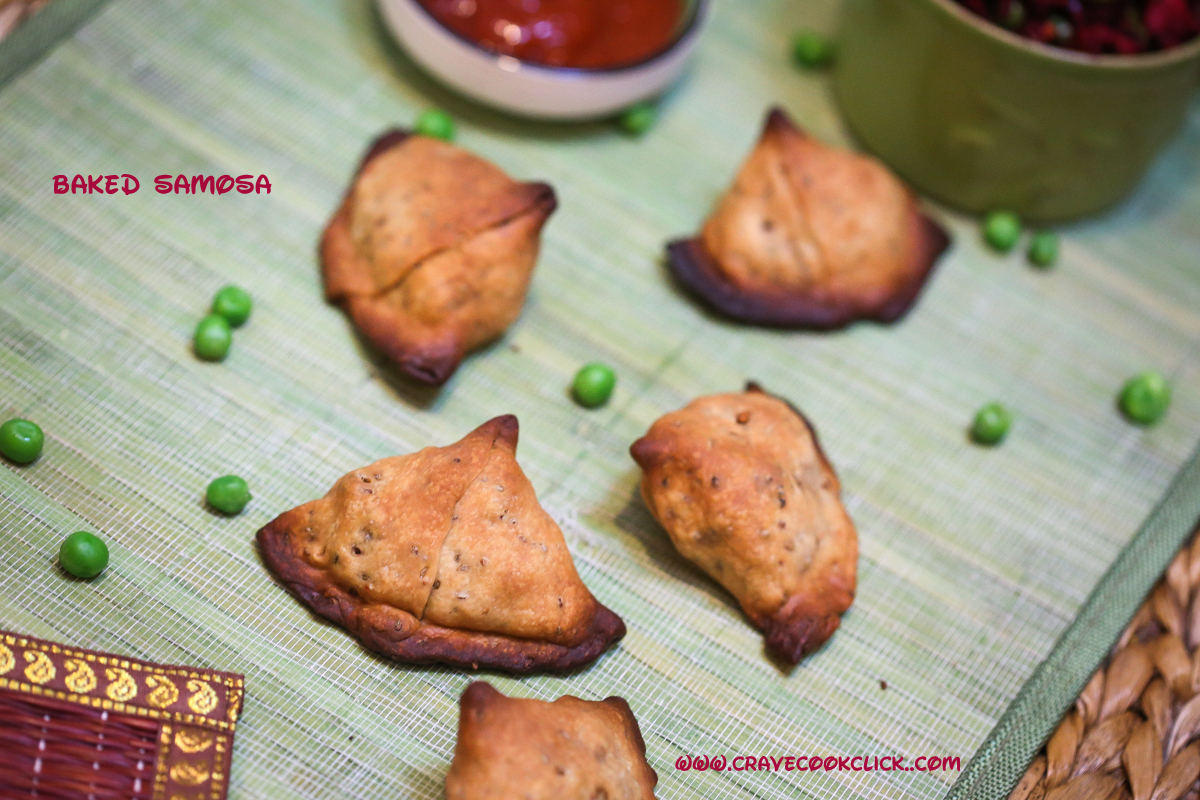 They are called samusa in Burmese, and are an extremely popular snack in Burma. 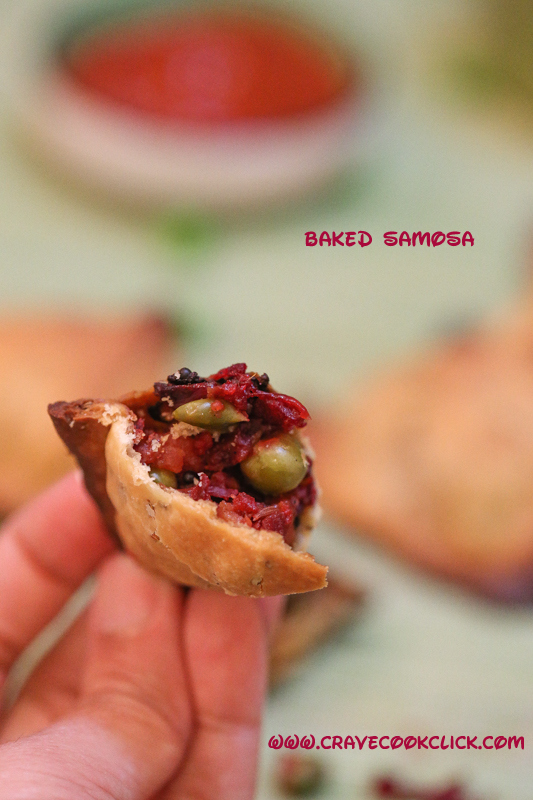 Both flat-shaped and full-shaped samosas are popular snacks in Bangladesh. The Bengali version of the full-shaped samosa is called a shingara and is normally much smaller than the standard Indian variety. The shingara is usually filled with pieced potatoes and vegetables, however, shingaras filled with beef liver is very popular in some parts of the country. The flat type samosa is called a somucha and is usually filled with onion and minced meat. 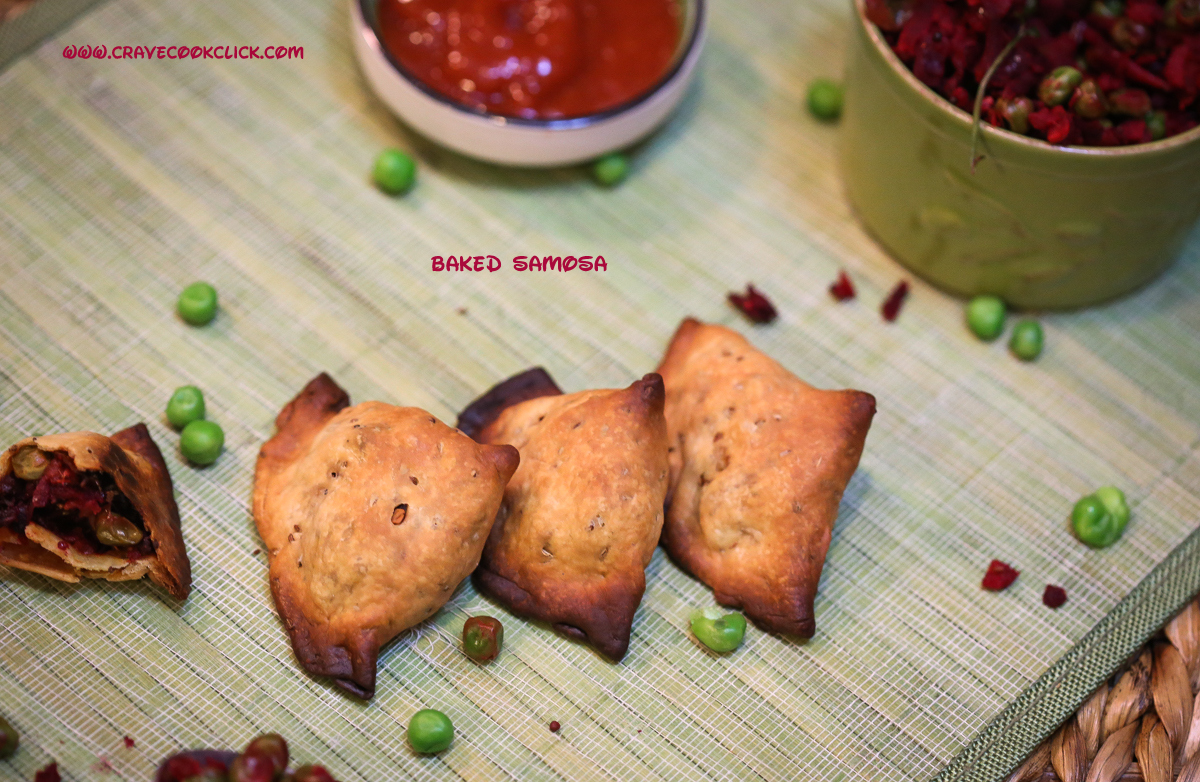 Samosas of various types are available all over Pakistan. In general, most samosa varieties sold in the southern Sindh province and in the eastern Punjab, especially the city ofcLahore, are spicier and mostly contain vegetable or potato based fillings. On the other hand, the samosas sold in the west and north of the country mostly contain ground meat based fillings and are comparatively less spicy. The meat samosa contains ground meat (lamb, beef or chicken) and are very popular as snack food in Pakistan. 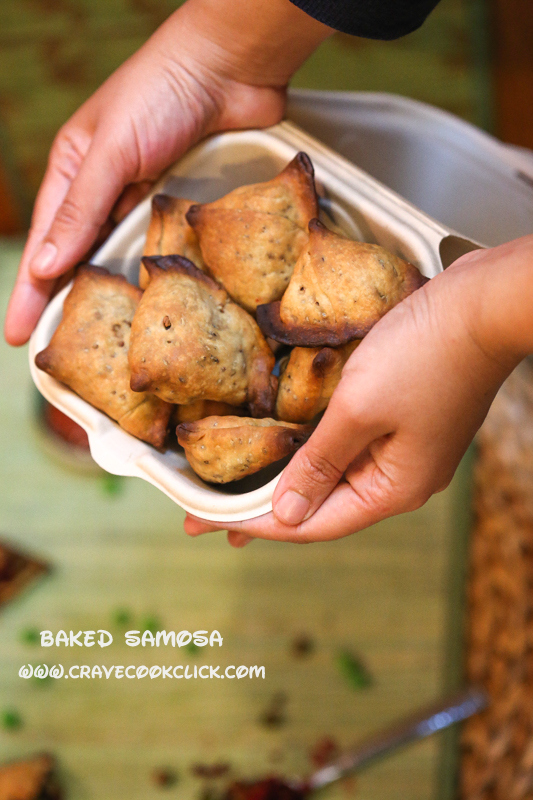 The local equivalent of samosas in Indonesia is known as pastel. It is usually filled with eggs, ground beef or chicken.

Samosas are a staple of local cuisine in the Horn of Africa (Djibouti, Eritrea, Ethiopia, and Somalia), where they are known as sambusa. While they can be eaten any time of the year, they are usually reserved for special occasions, such as Ramadan, Christmas or Meskel. 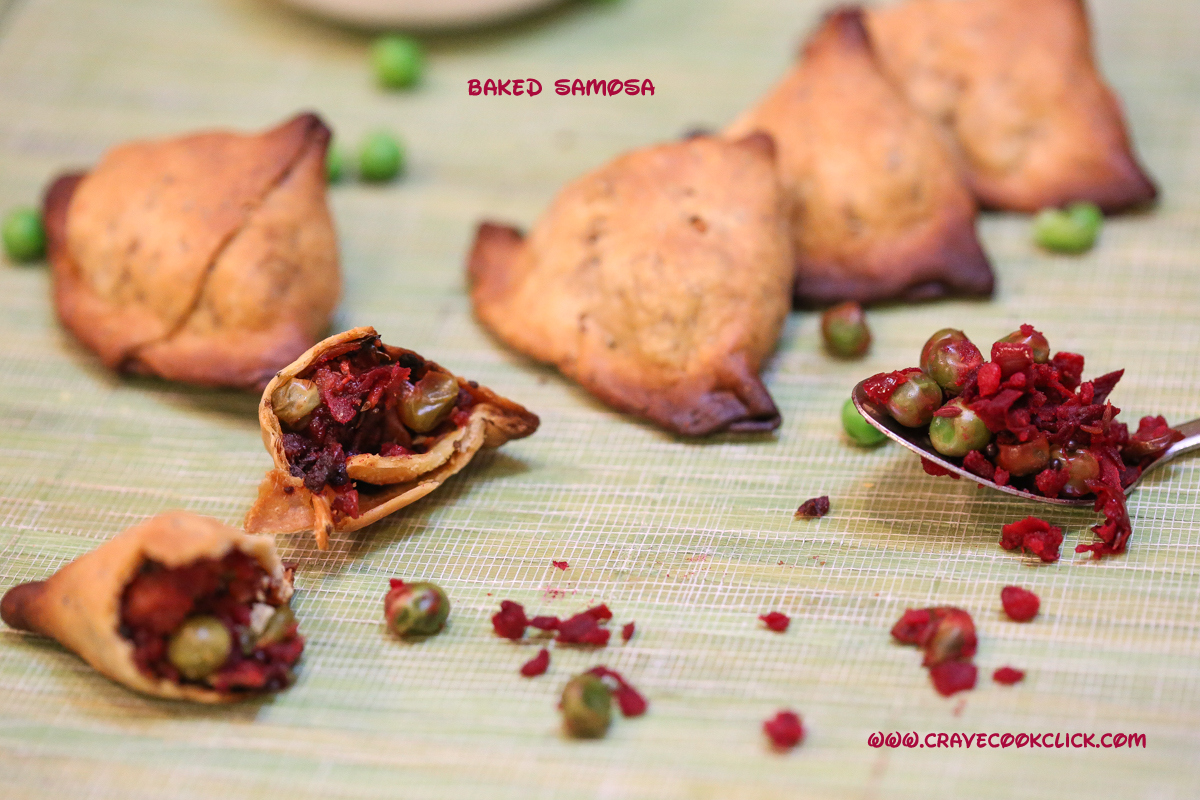 In Israel, a sambusak is a semicircular pocket of dough filled with mashed chickpeas, fried onions and spices. It is associated with Mizrahi Jewish cuisine. An Israeli sambusakis not as spicy as the Indian version.According to Gil Marks, an Israeli food historian, sambusak has been a traditional part of the Sephardic Sabbath meal since the thirteenth century. 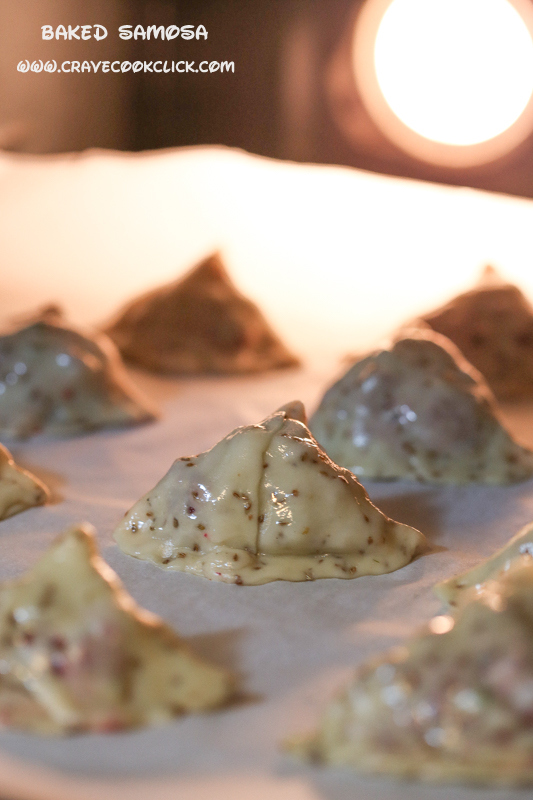 In the Maldives, the type of samosa made in Maldivian cuisine is known as bajiyaa. It is filled with a mixture, which includes mainly onions and Maldive fish. 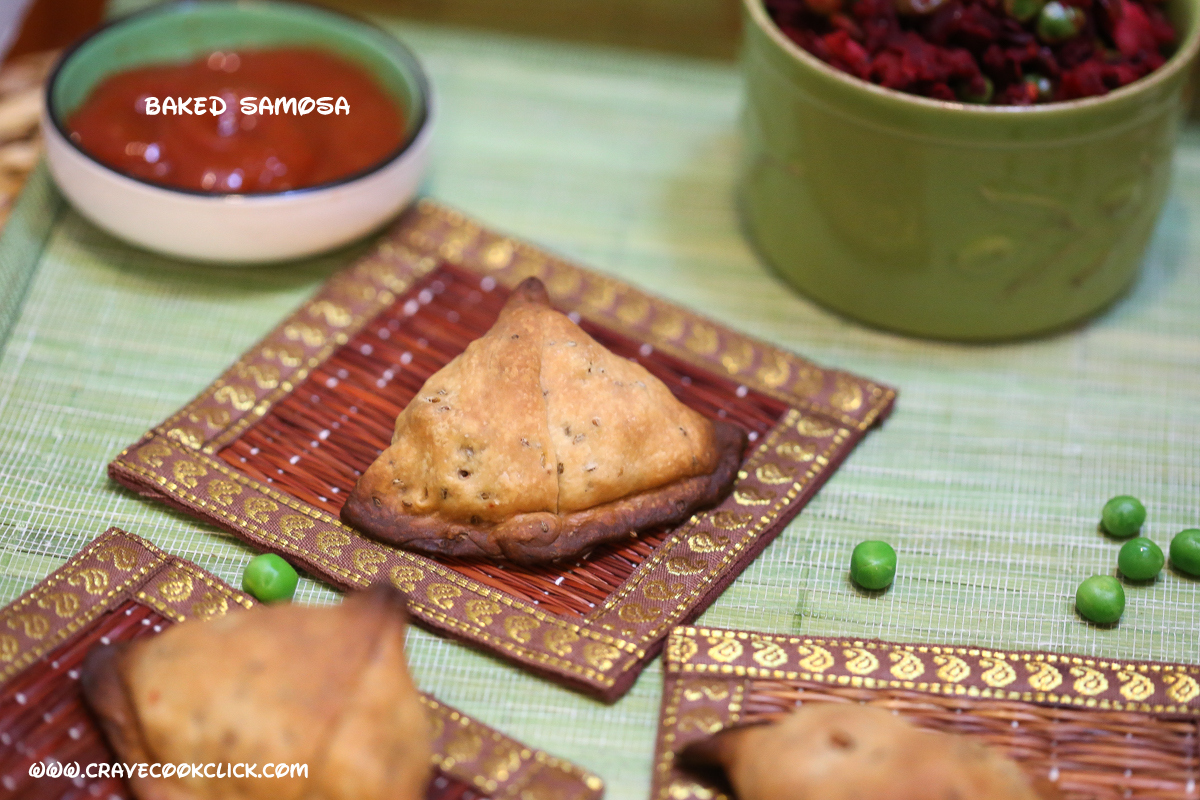 In Goa (India) and Portugal, samosas are known as chamuças. They are usually filled with chicken, beef, pork, lamb or vegetables, and generally served quite hot. Samosas are an integral part of Goan and Portuguese cuisine, where they are a common snack. 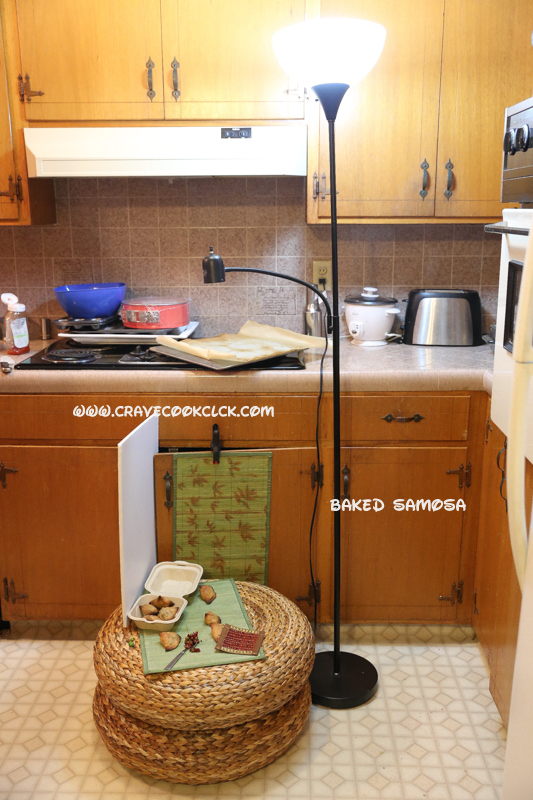 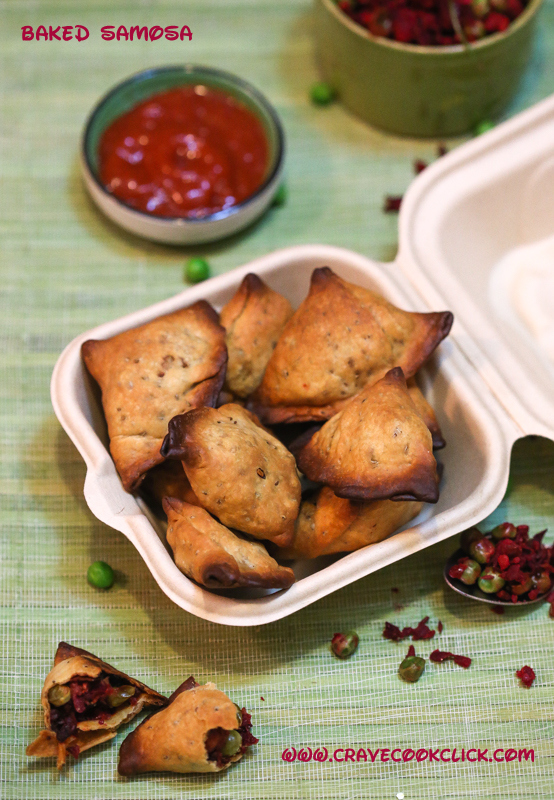 While samosas are traditionally fried, many Westerners prefer to bake them, as this is viewed as more convenient and more healthful by some diners. Variations using phyllo,  or flour tortillas are sometimes used. 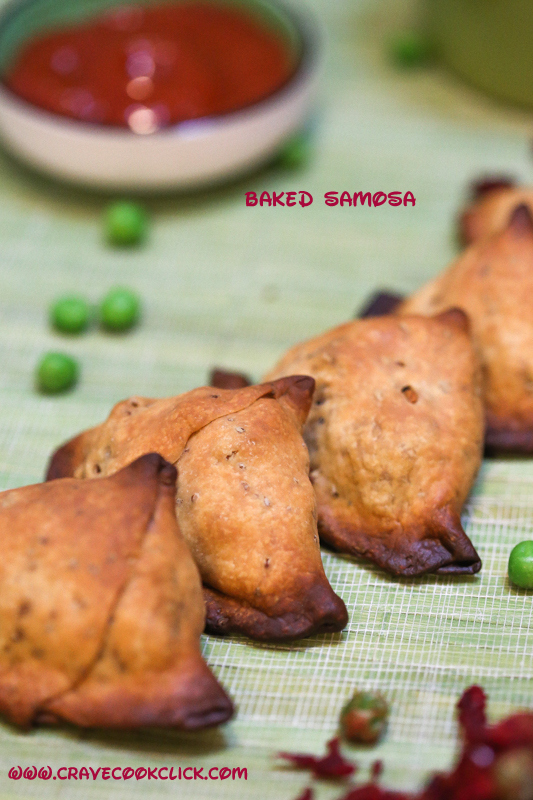 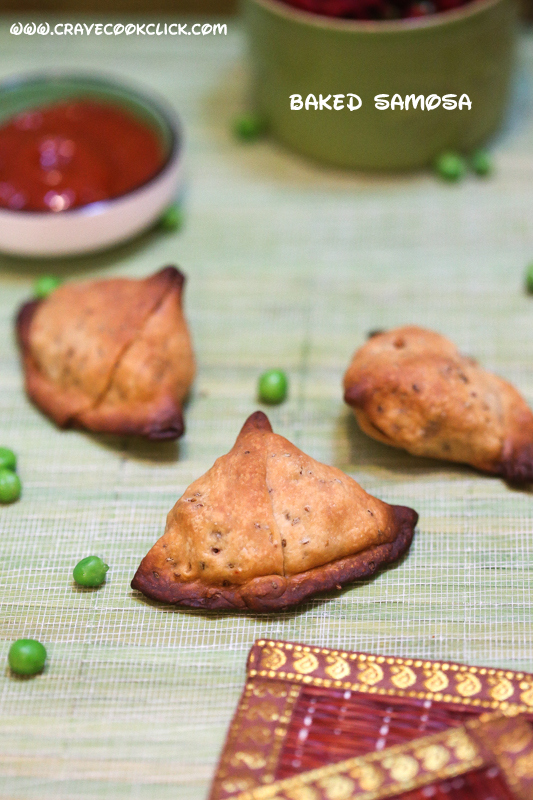 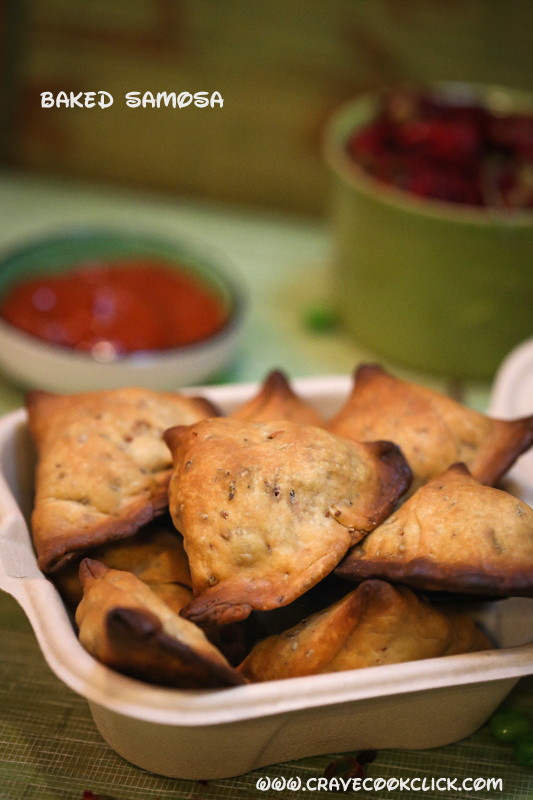 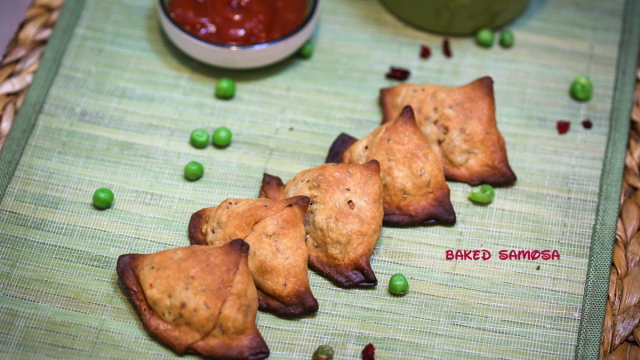