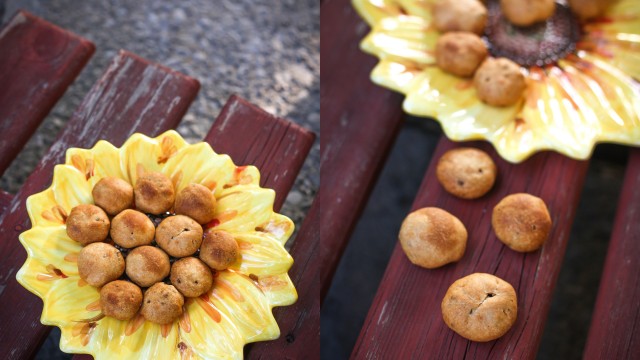 Baked Moong Dal Kachori is a snack made from lentils and indian spices. Generally it is fried but i have made an healthier version by baking it instead of frying. This kachori has sweet and savory flavors and goes really well with hot tea or chutney.

Kachori or Kachauri or Kachodi or Katchuri is a spicy snack popular in various parts of India including Uttar Pradesh, Rajasthan, Delhi, Maharashtra, Madhya Pradesh, Gujarat, Bengal and Orissa.

1 tsp Salt or to taste

Rinse and soak the moong dal for overnight. The next day drain the water and grind it coarsely. Keep it aside.

Knead the dough using the ingredients mentioned below kachori dough. Cover it with a damp cloth and keep it aside for 20 minutes.

To make the stuffing, in a bowl take 4 tbsp water, add all dry masalas to it and make a runny paste.

In a pan heat oil and add grated ginger to it. Cook until the raw smell goes away.

Now add the dry masala paste and saute for 5 minutes. Add the moong dal, cilantro, mix everything well and cook till the water evaporates.

Make round chapatis out of the dough. With cookie cutter, cut out circles. Fill the circles with the stuffing. Make sure to seal the kachoris in round shape.

Grease the cookie sheet and bake the kachoris at 375 degrees for 30 minutes. After 15 minutes flip the kachoris so that they get cooked properly.

Serve it hot with chai or chutney.

Some fun facts about Kachori

Kachori is supposed to have originated in Uttar Pradesh or Rajasthan.In these states it is usually a round flattened ball made of fine flour filled with a stuffing of baked mixture of yellow moong dal or Urad Dal (crushed and washed horse beans), besan (crushed and washed gram flour), black pepper, red chili powder, salt and other spices.

Additionally in Rajasthani cuisine, the Pyaaj Kachori (onion kachori) is very famous. Another form of Kachori which is famous in Rajasthan is the Mawa Kachori. It is a sweet dish which is dipped in sugar syrup.

In Gujarat, it is usually a round ball made of flour and dough filled with a stuffing of yellow moong dal, black pepper, red chili powder, and ginger paste.

In Delhi it is often served as a chaat. Also Delhi has another kind of kachori, called ‘Khasta kachori’ or ‘Raj Kachori’.

A variant includes sweet upwas (fast) kachori, made with potato, coconut, and sugar. Kachoris are often served with a chutney, often made from tamarind, mint, or coriander. Another variant is fried and stuffed with pulses (urad and moong especially) and it is generally found in Kutch region in Gujarat. A kachori stuffed with peas is a delicacy in Bengal.

Some of the variants popular in North India includes a version similar to the Rajasthan version accompanied with a curry made of potatoes and varied spices or even chana (chole), similar to one served in chole bhature.