And many passed along the news with their iPads and Macintoshes and iPhones, simply because these devices of his creation had become so integral to their daily lives.
Fans of Mr. Jobs paid tribute too in a more traditional way — with flowers and silence. Outside the flagship Apple store on Fifth Avenue in Manhattan, people had left two bouquets of roses and some candles late Wednesday, and some sat around quietly using their Apple laptops. 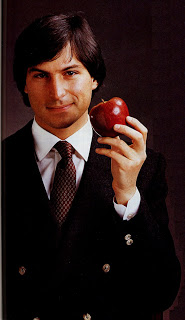 At an Apple store in the meatpacking district in New York, someone left an apple, with one bite taken out of it, mimicking the Apple logo. A note read: “iThankYou.” There were also flowers outside of Apple’s headquarters in Cupertino, Calif.

We generally hangout in Palo Alto downtown on weekends and pass the Apple store. But there was so much of vacuum and sadness this weekend which you could feel  while walking down the University Avenue of Palo Alto. I went to buy my first Mac product in the store which was full of flowers , letters, candles and pictures which showed how much people love, respect and will miss Steve Jobs.
Today I saw an amazing documentary on the life of Steve Jobs on Bloomberg Game Changers. The journey of his life from starting up of apple in his home garage, next technology, macintosh, pixar and  the “i”series. It was  so inspiring, motivational and heart touching. He was a visionary, pioneer and genius.
He always believed in Changing the World and he definitely did and made it much easier with the Apple products. Apple products were always unique and different which was the tagline of their most appealing commercial so far.

I loved the lyrics of this commercial.

Here’s to the Crazy Ones.
The misfits.
The rebels.
The troublemakers.
The round pegs in the square holes.
The ones who see things differently.
They’re not fond of rules.
And they have no respect for the status quo.
You can quote them, disagree with them,
disbelieve them, glorify or vilify them.
About the only thing that you can’t do, is ignore them.
Because they change things.
They invent. They imagine. They heal.
They explore. They create. They inspire.
They push the human race forward.
Maybe they have to be crazy.
How else can you stare at an empty canvas and see a work of art?
Or, sit in silence and hear a song that hasn’t been written?
Or, gaze at a red planet and see a laboratory on wheels?
We make tools for these kinds of people.
While some may see them as the crazy ones, we see genius.
Because the ones who are crazy enough to think that they can change the world,
are the ones who do.