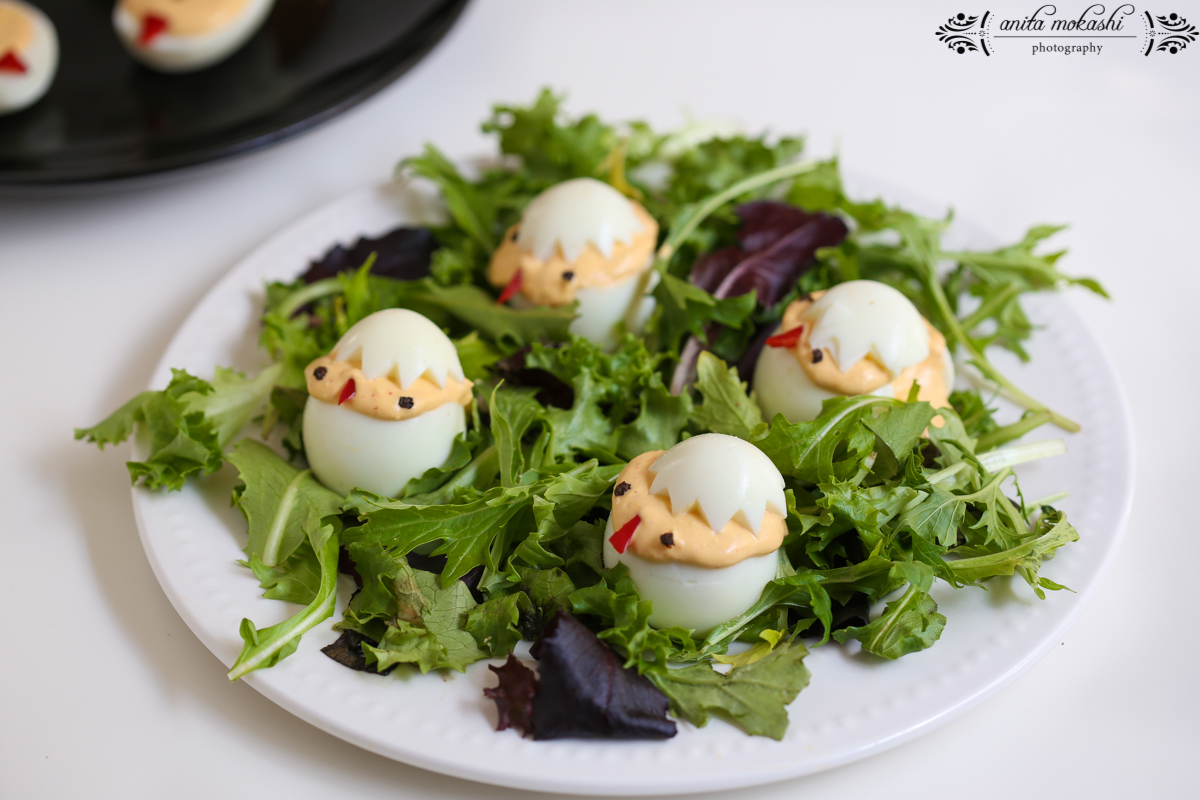 Deviled eggs or eggs mimosa are hard-boiled eggs, shelled, cut in half, and filled with the hard-boiled egg’s yolk mixed with other ingredients such as mayonnaise and mustard, but many other variants exist internationally. Deviled eggs are usually served cold. They are served as a side dish, appetizer or a main course, and are a common holiday or party food.

It’ Easter on Sunday and I decided to make these for the occasion. I did 2 variations.. Devil Eggs & Chick-in-Eggs 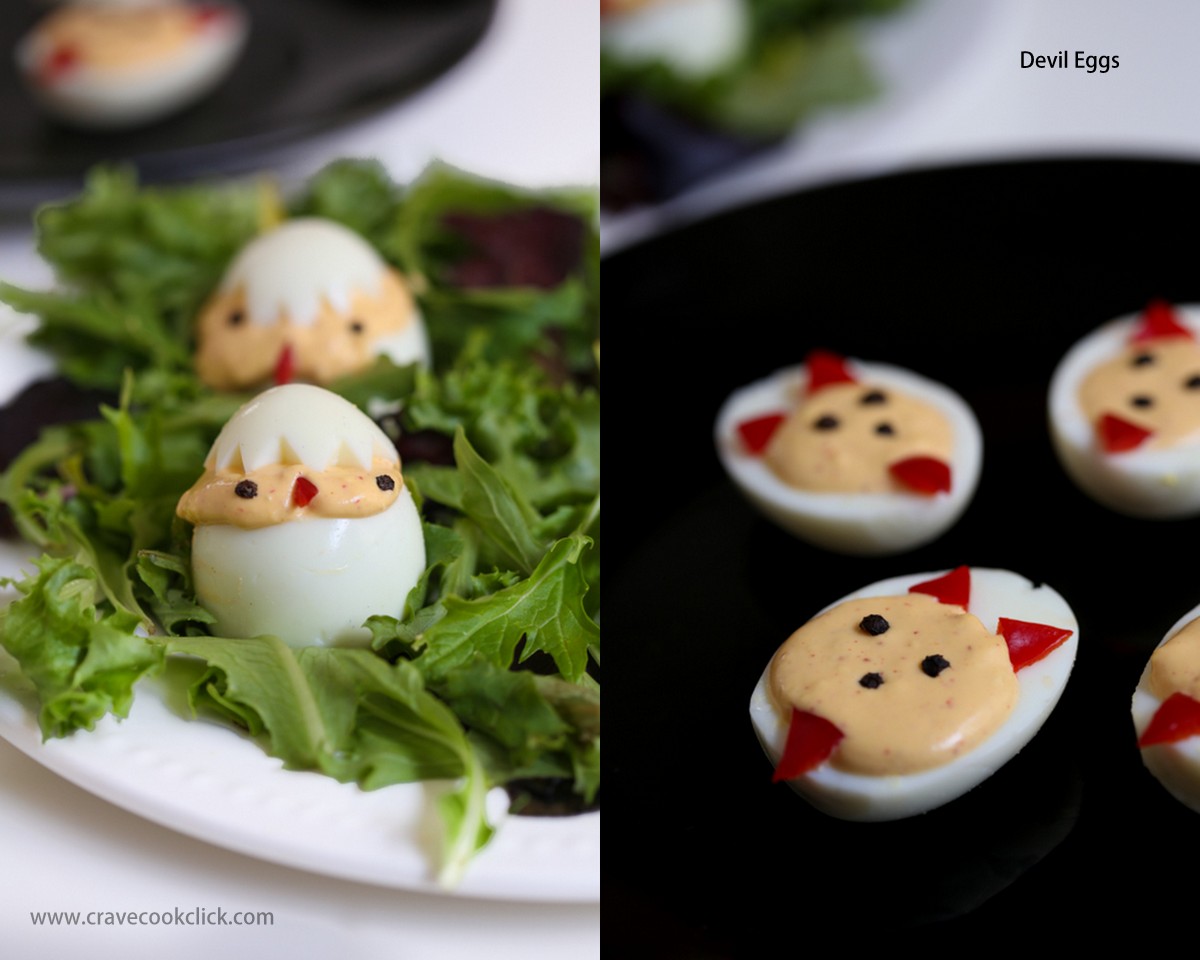 I made special spring chicks because they look so cute cracking out of their shells.

Eggs are festive food this time of the year as they are symbolic of transformations. The dead of winter is reborn into the hope of spring; the rising of Jesus from the dead represents new life; yolks turn into yummy appetizers.

Do deviled eggs differently during Easter Week and decorate them as spring chicks!

Some Easter facts for fun Easter is the celebration of the resurrection of Christ three days after his death. It is the oldest Christian holiday and the most important day of the church year. 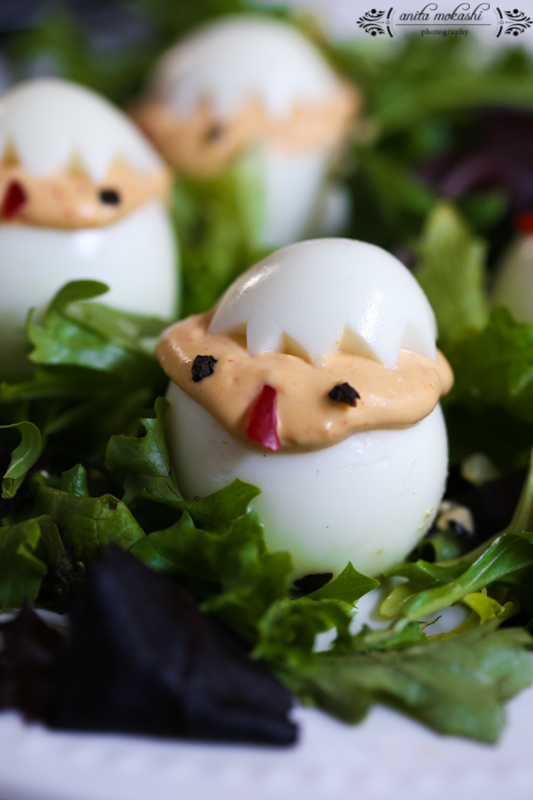 After Halloween, Easter is the biggest candy consuming holiday. 120 million pounds of candy are bought each year, enough to fill four dump trucks.

90 million chocolate bunnies, 91.4 billion eggs and 700 million peeps are produced each year in the United States.

76% of people eat the ears on chocolate bunnies first.

Americans consume over 16 million jellybeans on Easter, enough to circle the globe three times over.

Half of the states in the United States have banned the practice of dyeing chicks for Easter. However, Florida recently overturned the 45-year-old law of preventing the dyeing of animals, which will come into effect July 1st.

To help Americans in need, egg farmers across the country are donating more than 11 million eggs to food banks across the nation.

The White House hosts an Easter Egg Roll on the front lawn each year. This tradition was started by President Rutherford B. Hayes in 1878.

Make the stuffing by mixing everything mentioned under filling. Put it in a piping bag and keep it aside. 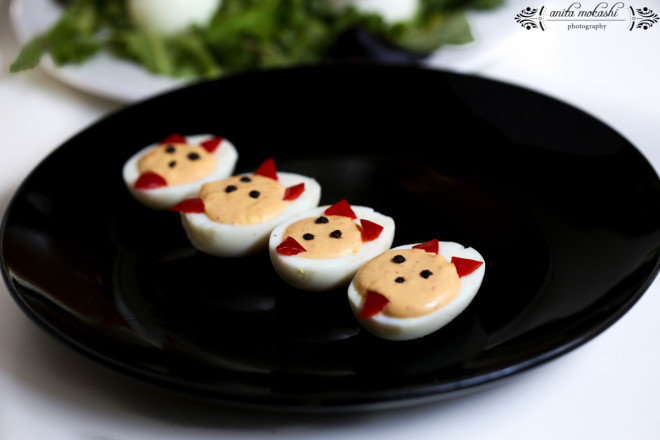 Boil, cool and shell 3 eggs. Slice the eggs in half lengthwise.

Slice the red bell pepper into a long strip. Cut out tiny triangles and arrange on them on the egg. To make the devil’s horns and beard, use two red bell pepper triangles pointing up on the wider end of the egg and another one pointing down on the opposite side of the egg. Lightly  insert the black pepper to make the eyes and nose. Refrigerate until ready to serve. 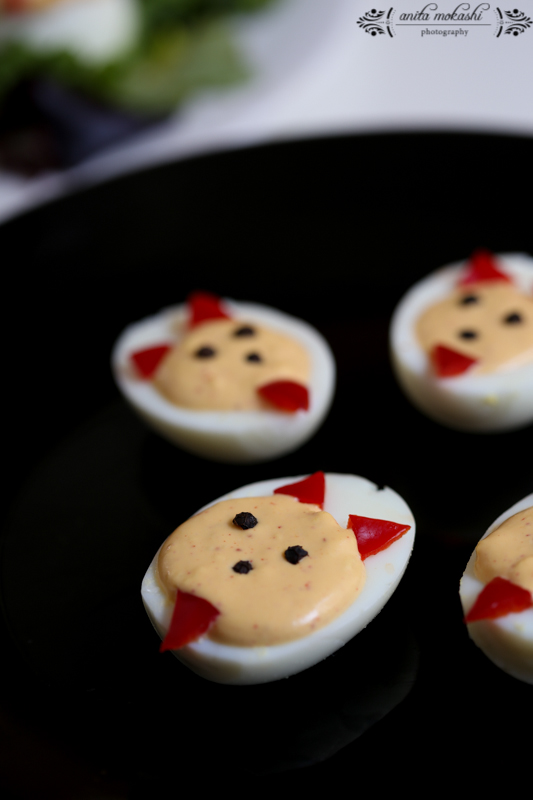 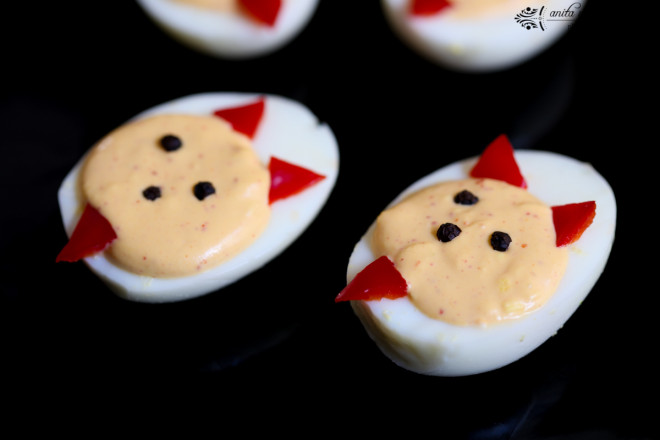 Boil, cool and shell the remaining 4 eggs. Slice a little piece off the bottom of an egg so it could stand on its own. Slice the egg 1/3 from the top, making the bottom 2/3 larger.

Carefully remove the yolk and add to the filling.

Use a sharp paring knife to cut triangular “cracks” from the top and bottom of the egg whites. Set aside

Generously fill the bottom of the egg whites with a mound of the yolk mixture.Cap off with the top egg whites. Slice thinly red capsicum for the nose. Position them on the egg yolks. Lightly insert the black pepper  to make the eyes. Refrigerate until ready to serve. 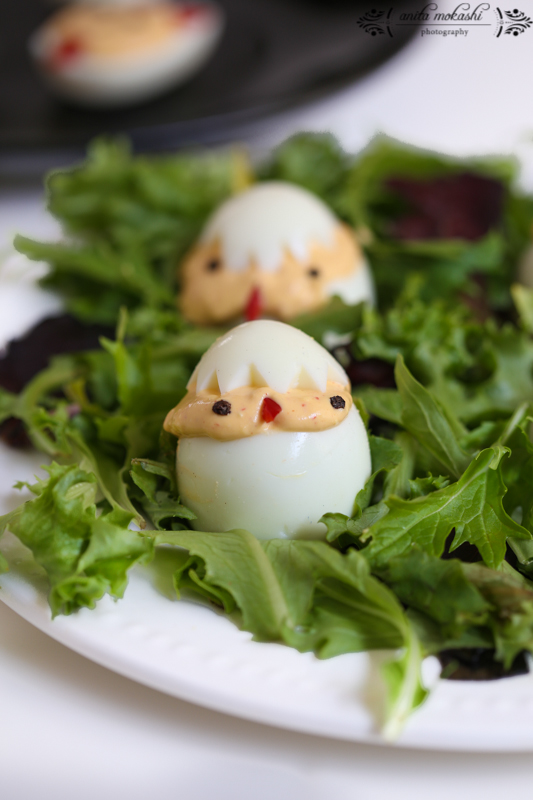 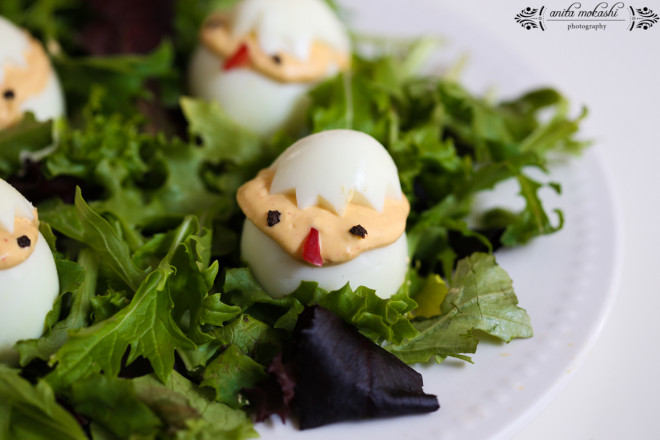 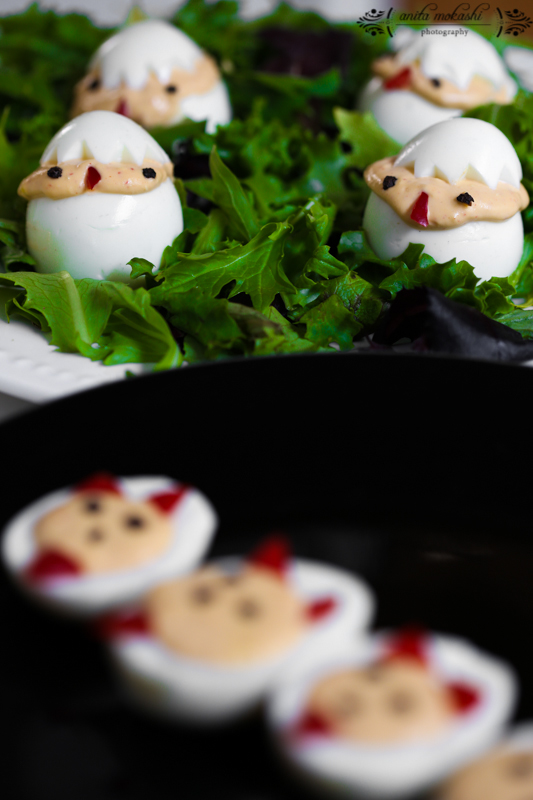 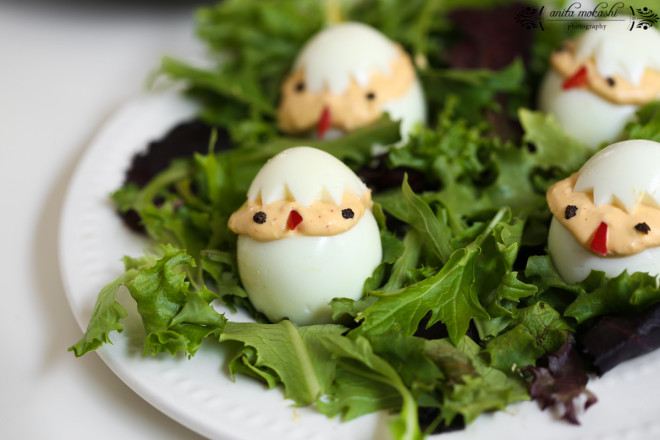 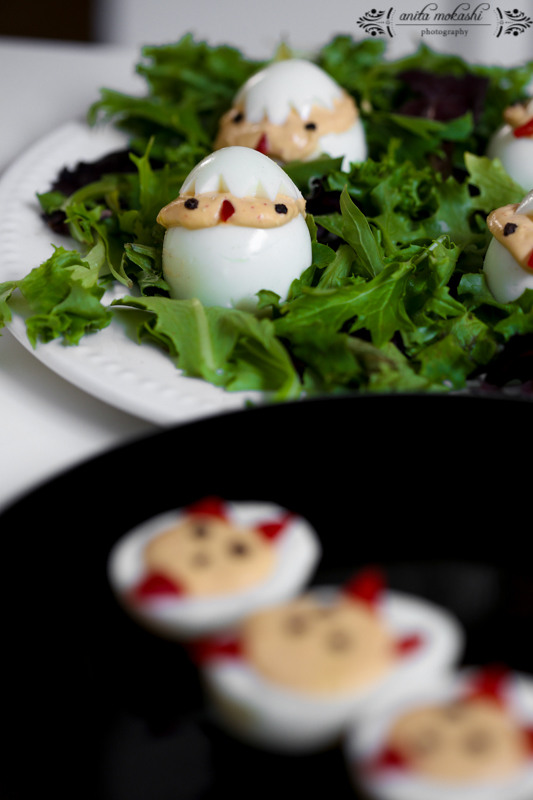 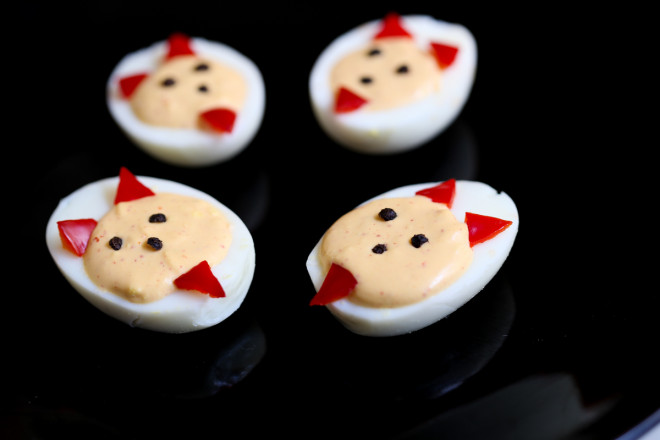 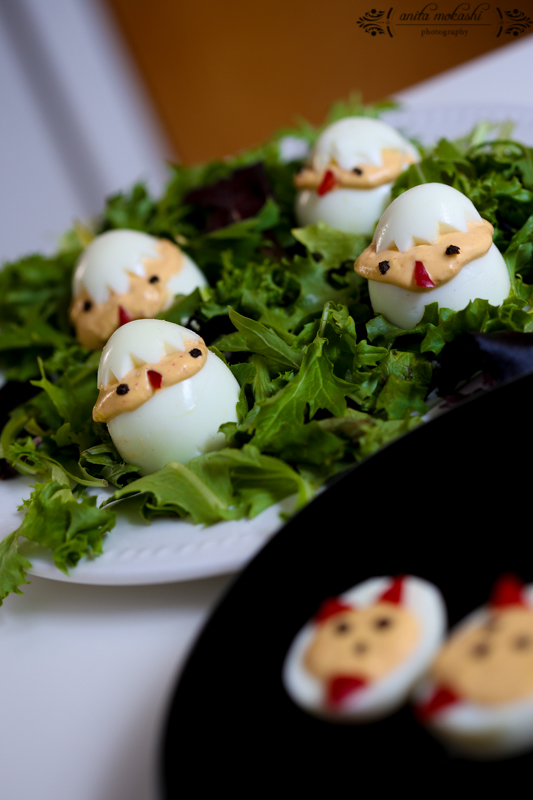 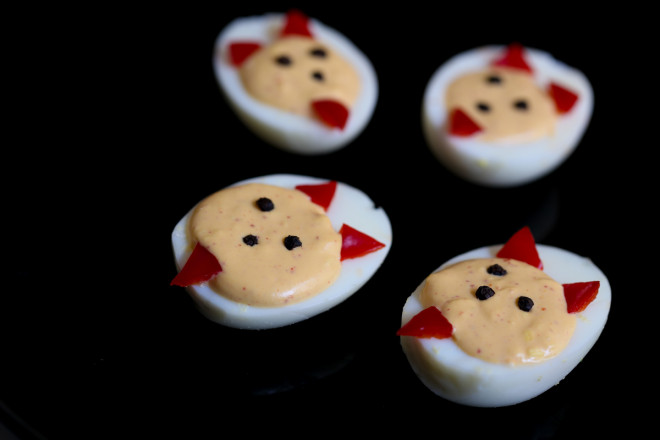 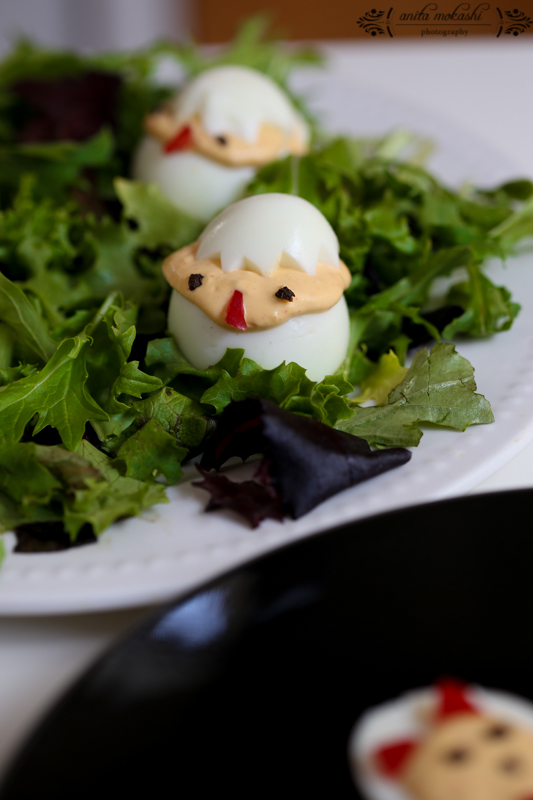 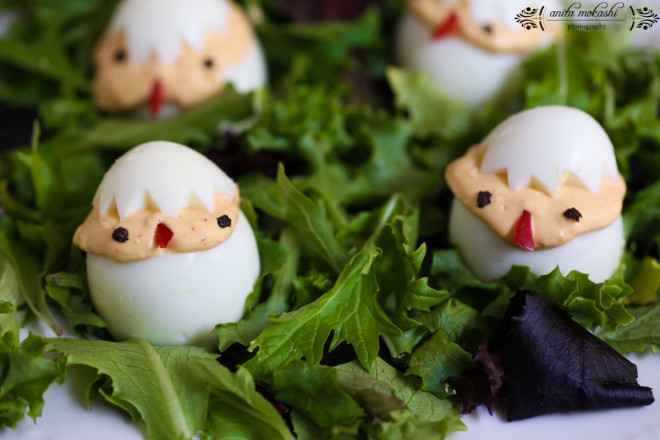 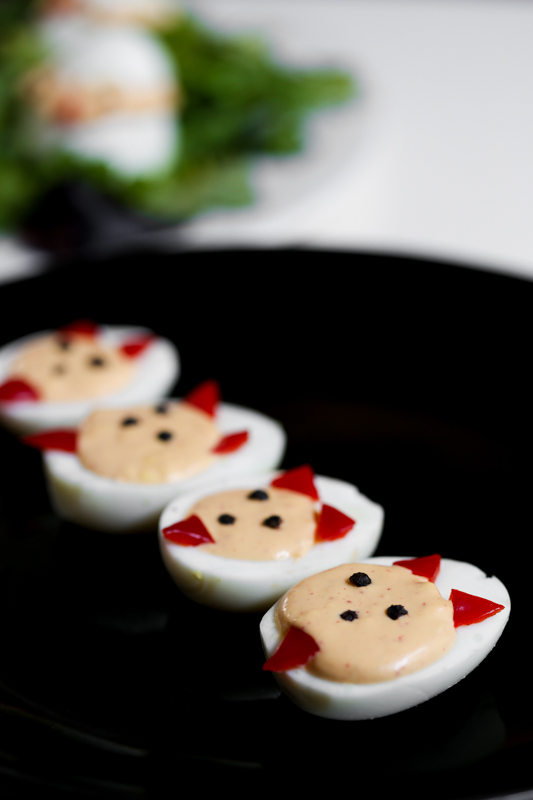 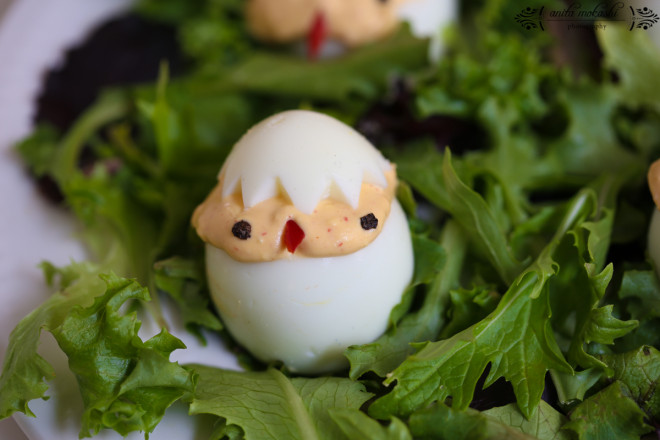 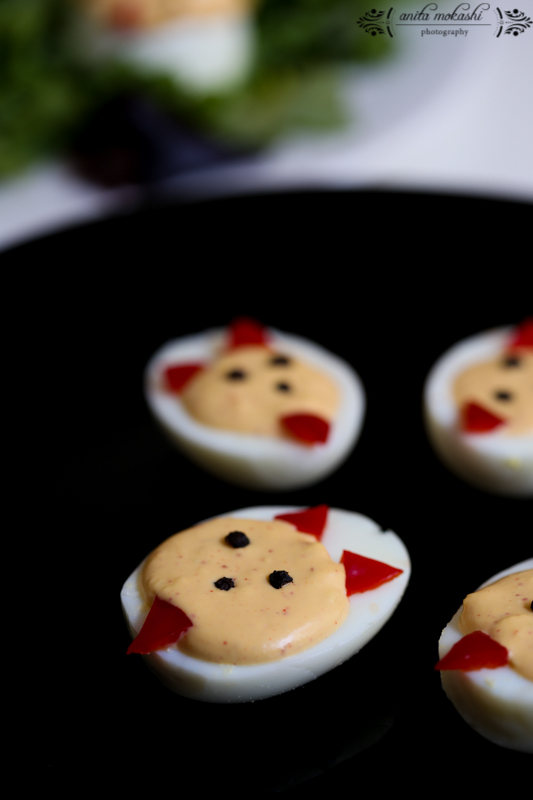 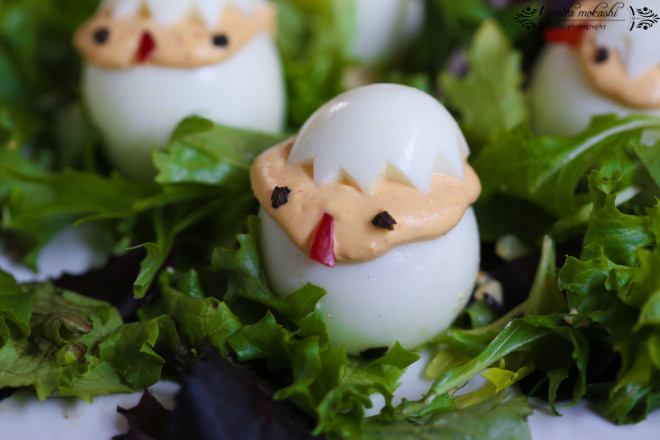 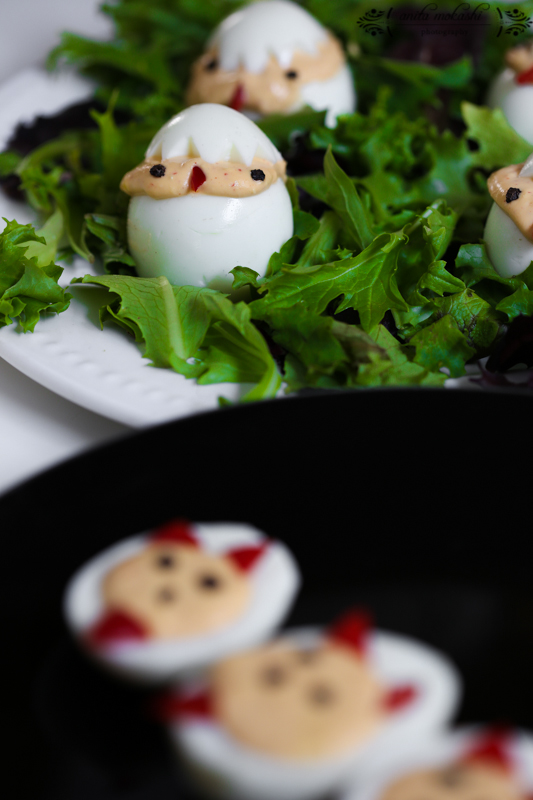 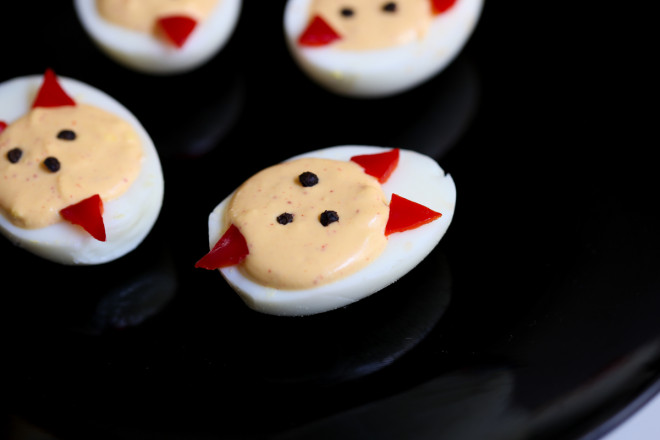 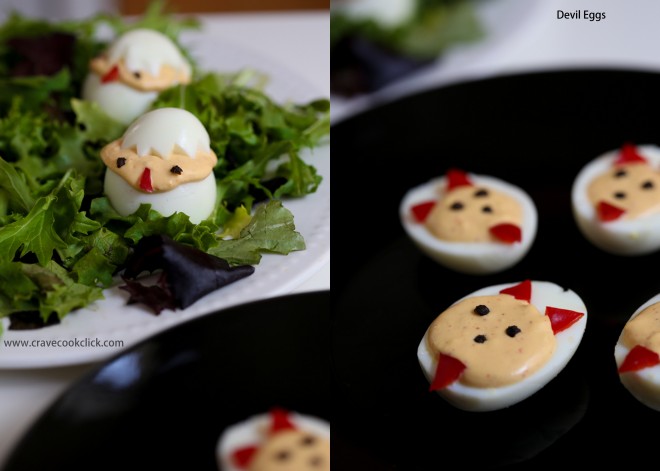